Thanks to the victory, Thailand have met their target of taking home three gold medals from the third Youth Olympics in Argentina's capital.

Atichai's win means all five Thai boxers in the tournament have reached the semi-finals.

At the Hurlingham Club, overnight leaders Atthaya and Vanchai had a combined score of 140 in the third and final round for a total of 12-under par 268.

The Thai duo were one shot ahead of Americans Lucy Li and Akshay Bhatia, while Argentina's Ela Anacona and Matero Fernandez de Oliveira finished third on 273.

Italy, who were second behind Thailand after two rounds, ran out of steam in the final round and left empty-handed in fourth place.

It was Atthaya, 15, who guided the Thai team to the gold medal.

The US pair were on fire in the last round and took the lead after 15 holes.

"I thought we were playing for the silver medal,'' said Vanchai, 16. 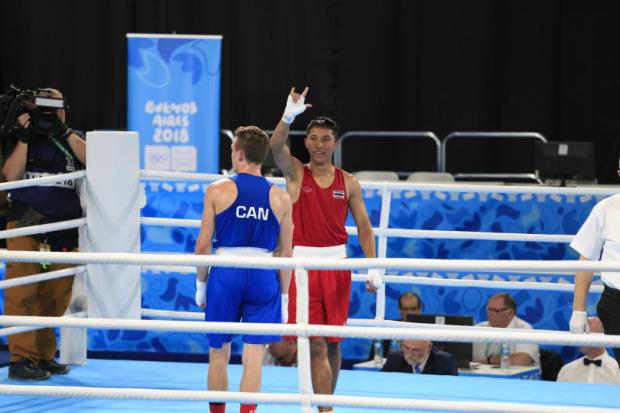 But the Americans had a bad result at the 16th hole and then Atthaya made two birdies in the final two holes to seal the win.

"Jeen [Atthaya's nickname] is the hero,'' said Vanchai, who burst into tears during an interview on the course.

Atthaya said: "I am very happy. It's an honour to win gold for our country."

Arguably the best female amateur golfer in the world at the moment, Atthaya began her rise rapidly last year.

At the age of 14 years, four months and 19 days, she claimed the 2017 Ladies European Thailand Championship in Pattaya to become the youngest ever golfer to win a professional event.

This year, she won the inaugural Women's Amateur Asia-Pacific in Singapore in February.

With the win, she earned berths at the ANA Inspiration and the British Women's Open, and she took the low amateur honours at the two major championships.

Last month, Atthaya fought back from seven shots behind to win the individual title at the World Junior Girls Championship in Canada.

The success in Argentina is a perfect tonic for Atthaya who failed to deliver at the Asian Games in August.