Warm-up loss 'a blessing in disguise'

Sanrawat confident Thais will get better

Thailand midfielder Sanrawat Dechmitr says the War Elephants' 2-0 loss to Oman in a warm-up game late on Wednesday night will help coach Milovan Rajevac iron out the team's frailties ahead of their 2019 AFC Asian Cup opener on Sunday. 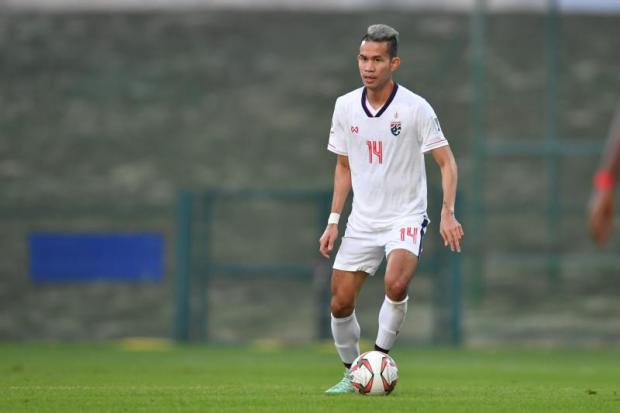 Thailand midfielder Sanrawat Dechmitr in action during the warm-up game with Oman on Wednesday night.

The Thais, who are appearing at the finals of the Asian championship after a lapse of 12 years, meet India in their first Group A match in Abu Dhabi. The other two teams in the group are Bahrain and hosts the United Arab Emirates.

Thailand conceded a goal each in both halves of their warm-up game with Oman as Rajevac gave an opportunity to most members of the 23-strong Thai squad to press a claim for selection in the starting line-up for Sunday's battle.

Sanrawat, one of the stars of Thailand's failed bid to retain the 2018 Suzuki Cup title last month, has drawn some positives from the loss to Oman.

"I would say it was a good game for us," said the talented True Bangkok United playmaker.

"A number of players had the opportunity to showcase their talents and a number of our weaknesses were exposed during the match.

"It is good for the team that we have noticed our problems in a warm-up game. It is like a blessing in disguise for us.

"Mistakes are obviously part and parcel of every match, but now that we know what is wrong with our game, we can at least try to limit them."

Sanrawat added that the Thais suffered from a lack of effective coordination among the players on Wednesday night.

"The thing we need to improve over the next few days is team coordination as the players need to develop a better understanding of each other.

"As a player nobody wants to lose, but I don't think the defeat will affect the team's morale.

"It is good to lose and spot your problems in a warm-up ahead of a major tournament. We are all determined to do well in the Asian Cup."

For some unexplained reasons, the Thai team's training session scheduled for last evening was cancelled.

Thailand will play their second Group A game against Bahrain on Jan 10 before facing the host country on Jan 14.

Thailand's best result in the tournament was recorded more than 40 years ago when they finished third at home in an Asian Cup that featured only six teams.

India captain Sunil Chhetri backs the squad's young core to play out of their skins and test their Asian Cup opponents when they begin their campaign on Sunday.

Coach Stephen Constantine has selected a 23-man squad whose average age is below 25 as India look to improve on their last appearance in 2011 when they were knocked out in the group stage.

"Apart from me and Gurpreet [Singh], it's a first-time experience for all else," Chhetri said.

"Everyone is ready to grab this opportunity. I can assure you that it won't be an easy job for other teams to face us.

"We are a team who hate to lose, and we have proven it in recent times. We are working as per the plan."

India face Thailand in their Group A opener in Abu Dhabi on Sunday before taking on hosts UAE on Jan 10 and Bahrain on Jan 14.

"At the moment, our sole focus is on our opening fixture, the game against Thailand," Chhetri said.

"We know that Thailand will be a very tough opponent and we are concentrating only on them.

"We are not looking [at] anything beyond that. There are matches against UAE and Bahrain lined up but we will think about them only when they come."

Boyle was ruled out of the tournament after suffering a left knee injury in Sunday's 5-0 friendly win over Oman and returned to club side Hibernian to continue his recovery.

Giannou's registration was completed by the Asian Football Confederation on Wednesday, allowing the AEK Larnaca player to link up with the team in Al Ain ahead of their opening clash against Jordan on Jan 6.

"Apostolos has been playing regularly in Cyprus with his club, as well as in the Uefa Europa League throughout 2018. He has arrived with the determination to impress and make the most of the opportunity," Arnold said in a statement.

"Our group has welcomed 'Apo' back into the Socceroos family and having been with us in Turkey, the United Arab Emirates, and Kuwait earlier this year, Apo has a clear picture of how we work and the principles of play."

Champions Australia were already without midfielders Daniel Arzani and Aaron Mooy before Boyle's injury but Arnold said that Giannou had the necessary qualities to make up for the loss of the Scotland-born winger.

Giannou, who scored his first goal for Australia in a 4-0 win over Kuwait in October, completed a medical with the team ahead of his first major international tournament.

"I'll be doing everything I can to impress in training and perform in matches here in the UAE," he said.

"We have a great squad with a great culture and together I believe we will achieve our goals." bangkok post/reuters