Thailand take on Vietnam in a crucial World Cup qualifier Tuesday night, needing to avoid defeat at all costs at Hanoi's My Dinh Stadium.

The War Elephants are still smarting from their shock 2-1 defeat at the hands of Malaysia on Thursday in Kuala Lumpur and losing the top spot in Group G of Asia's second qualifying round for the 2022 World Cup to Vietnam.

Another loss would leave the Thais trailing their regional rivals by a massive six points.

They could even drop to third spot in the qualifying pool for Qatar 2022, if Malaysia beat struggling Indonesia in Tuesday's other group game.

Vietnam, after their sensational 1-0 victory over the United Arab Emirates on Thursday, have taken over sole possession of the top spot in the group with 10 points, three more than the Thais.

Malaysia and the UAE share the third spot with six points each while Indonesia have yet claim any point after four matches.

On the eve the battle, Thailand coach Akira Nishino and his Vietnamese counterpart Park Hang-Seo were faced with contrasting problems.

While Nishino wants his men to move on from the loss to the Malayan Tigers, Park is busy telling his players to forget about their victory over the UAE.

Nishino told a pre-match news conference yesterday that his team's preparations had been affected by the inadequate training facilities provided by the host country.

"It is never easy to go anywhere and play an away game. This time however we had to find a training ground by ourselves," said the 64-year-old Japanese.

"I have been following Asean football for many years now. I can tell you that Vietnam have improved a lot and that too in a very short span of time.

"When I took over the War Elephants [in July], I knew that the Thai players are very talented, but at the same time I also knew that Vietnam would always be our toughest rivals in the region.

"The results of the Thai teams in the past had never been very good and we should realise that in football there are no shortcuts. We have to keep on developing, step by step."

Earlier, Nishino demanded an immediate response from his players after admitting his team allowed Malaysia to boss them on Thursday.

"We must move on from the defeat, focus on our recovery and on our next opponents. A lot of factors let us down against Malaysia," said Nishino, who steered his native Japan to the 2018 World Cup last 16 round in Russia.

Meanwhile, Park, a native of South Korea, has attempted to temper expectations as hopes begin to rise that Vietnam will advance to the third round of the Asian qualifiers for the 2022 World Cup.

"We must forget the victory over UAE and start preparing for Thailand. There is still a long way to go," said Park.

Thailand goalkeeper Kawin Thamsatchanan, who was also at yesterday's press conference, was one of the nine members of the present squad which beat Vietnam 3-0 in Hanoi at the same stage four years ago.

"Every player in the team is ready and looking forward to the match. It is an important match for us and we expect a tough game, but I am sure we will make a determined effort to win the match," said Kawin. The match kicks off at 8pm (Thai time) and will be broadcast live on Thai Rath TV (32). 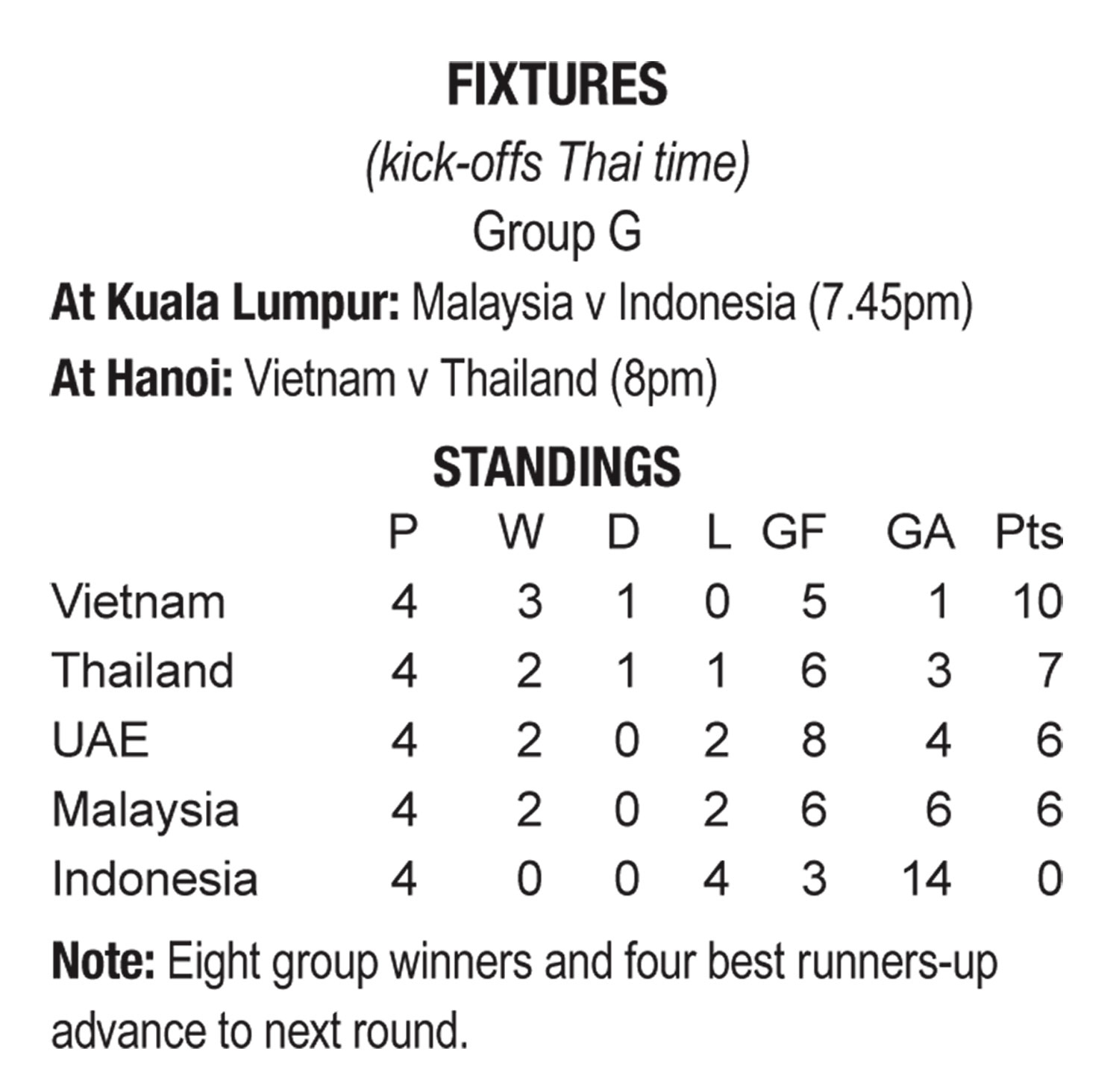