They join Pornpawee Chochuwong, their Thai compatriot in the women's singles, in today's semi-finals of the US$1.5 million tournament at Impact Arena, Muang Thong Thani.

However, women's world No.5 Ratchanok Intanon, who had lost to Pornpawee, failed to get past the group stage after losing to top-ranked Tai Tzu-ying of Taiwan 25-23, 12-21, 21-9 in Group B.

The season-ending World Tour Finals is the third and last tournament in three successive weeks in the Asian leg in Bangkok held behind closed doors and under strict Covid-19 protocols.

The win keeps alive the Thai pair's ambition of claiming a hat-trick of titles in the Asian leg. 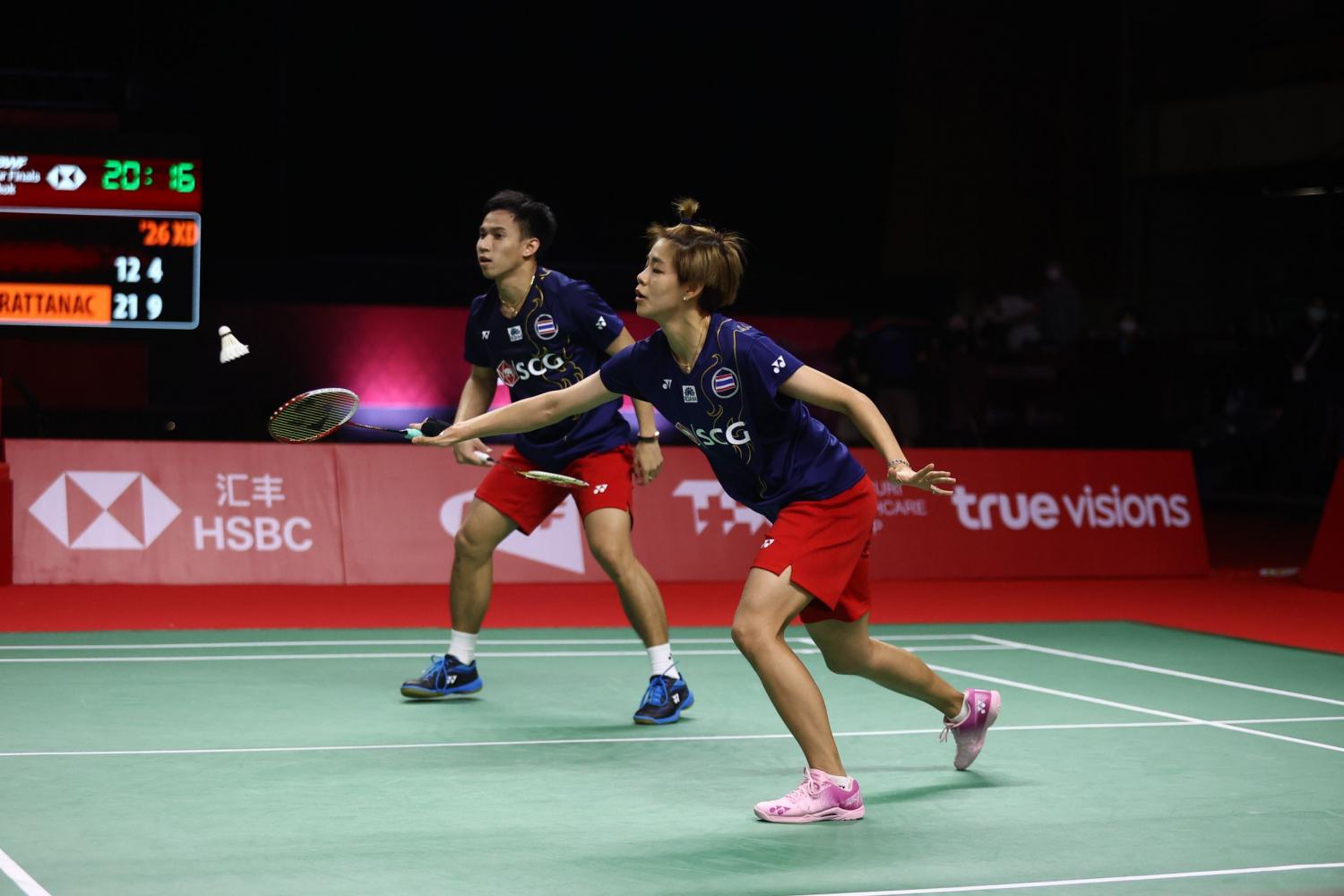 Dechapol and Sapsiree were drawn to meet the French duo in the semi-finals.

In the women's doubles, Jongkolphan and Rawinda defeated Linda Elfer/Isabel Herttrich of Germany 21-13, 21-14 in their final Group B match to advance to the semi-finals.

"We're happy to be in the semi-finals. We fought today because in every match we want to show what we can do. We will prepare ourselves both mentally and physically for the next round," said Jongkolphan.

Rawinda added: "I don't feel very happy about my performance. The Germans like to play a soft game, but we're not ready to play like that. I think I took it easy today to not put too much pressure on myself."

The Thais, who had two wins and one loss, finished second in Group B behind South Koreans Kim So-Yeong and Kong Hee-Yong.

In Group A, Malaysia's Chow Mei Kuan and Lee Meng Yean beat Greysia Polii/Apriyani Rahayu of Indonesia 21-13, 21-17 to progress to the semi-finals along with South Korea's Lee So-Hee/Shin Seung-Chan.

In the last four, Jongkolphan and Rawinda were drawn to face Kim and Kong, while Chow and Lee are up against Lee and Shin.

In the women's singles, Ratchanok suffered back-to-back losses to Tai, who also came from behind to finish off the Thai last week.

"I was very much disappointed that I could not make it to the semi-final round, but I will learn from my mistakes today and come back stronger on the court," said Ratchanok.

However, it was a meaningless encounter as Pornpawee had already secured a last-four berth and Sindhu had been eliminated.

"I have to admit that Sindhu had planned a perfect game against me. I did my best, but it was not good enough," said Pornpawee.

In Group A, An Se-Young of South Korea edged past Olympic champion Carolina Marin of Spain 21-16, 14-21, 21-19 in a meaningless match as both had already booked places in the semi-finals.

"I'm really happy as I have shed a lot of tears here. It's a good feeling and I can't describe it in words," said An, 18.

Marin said: "I didn't want to force myself today. My performance was okay. I played like it was a training session. I lost but I don't care about the result."

In the semi-finals, Marin takes on Pornpawee and Tai meets An.

Diving star Daley: Olympic champion who grew up in the public eye