BG Pathum midfielder Sumanya Purisay in action during the match against Sukhothai. PR

A goal each on the either side of the break ensured the win which took the Rabbits's tally to 66 points, 19 ahead of second-placed Buriram United with a maximum of 18 points available from the remaining six games.

Pathum, who have been unbeaten in the coronavirus-interrupted season, are the second first-time winners of the crown in a row.

Chiang Rai United ended the hegemony of the seven-time winners Buriram United and SCG Muang Thong United, who have claimed the coveted prize four times since the top league was reformed in 2008.

Pathum, promoted at the start of the ongoing season last year, have already booked their slot in the 2021 ACL Champions League by emerging as the first-leg winners. They will now represent Thailand at the top Asian club event in 2022 as well.

The Rabbits are likely to be handed over the trophy at the end of their March 20 home game against Ratchaburi.

Pathum got their first goal in the sixth minute when Sumanya Purisay hit the target with a free-kick.

Victor Cardozo then converted a penalty, awarded after Chenrop Samphaodi was fouled by Zaw Min Tun in the 70th minute.

In another match last night, defending champions Chiang Rai United kept their slim hopes of securing a place in the 2022 AFC Champions League from the tournament alive with a hard-fought 4-3 victory over visiting Chonburi.

The result helped push Chiang Rai up to a tie for the fifth place with Samut Prakan City and True Bangkok United on 38 points, but the Beetles have a game in hand.

Chotipat Poomkaew gave the Beetles the edge in the 19th minute but the two sides went into the break level 1-1 after Eliandro equalised on 38 minutes.

The second half started well for the Sharks as Eliandro struck within the minute but the visitors' lead lasted only a few minutes.

The visitors conceded a penalty when Settawut Wongsai committed a handball inside the box and Bill Rosimar converted with ease from the spot.

Sarawut Inpaen gave the home team hope for three points at the hour mark, but Chonburi fought back to get back on even footing on 78 minutes when Worachit Kanitsribumphen's shot was deflected into the net by Chiang Rai defender Suriya Singmui.

The winner for the defending champions came during the six-minute injury time with Somkid Chumnarnsin helping Chiang Rai edge the high-scoring thriller. 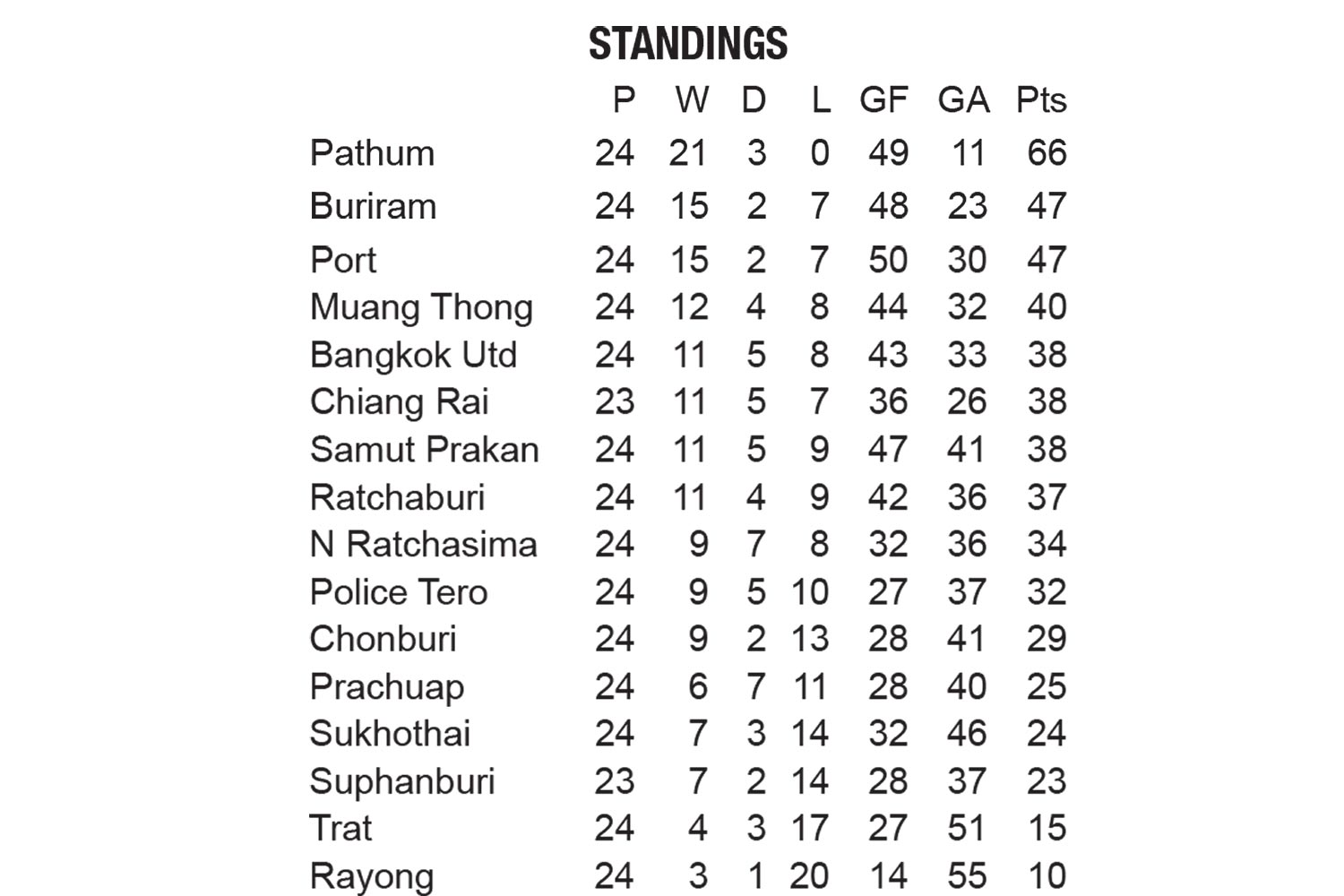