Thailand coach Mano Polking is aiming to take the national side to a higher level after guiding the War Elephants to a record-extending sixth title at the 2020 AFF Suzuki Cup on Saturday night.

Having won 4-0 in the first leg of the final, the Thais were held 2-2 by Indonesia in the second leg for a 6-2 victory on aggregate at Singapore's National Stadium.

Polking hailed the achievement as a "special" one and a base to keep pushing Thai football forward.

"After such a difficult year, football is still a great opportunity to make people happy and I hope this is a New Year gift for all people in Thailand after difficult times," said the German-Brazilian coach who was in his first tournament in charge of the War Elephants.

"I'm so happy that we won but also that we won in a special way and I just have to give thanks to everyone from the staff, the officials and especially the players.

"This is a prestigious tournament and we're so happy that we won it but we don't want to stop here and then not have a chance in the World Cup qualifiers or Asian Cup qualifiers.

"We showed some brilliant moments of football, defended well when we had to and created the most chances in the tournament so we have to take that belief to the next level now."

"I have to thank Madam Pang [Nualphan] for believing in me," the former Bangkok United coach said. Polking came to Thailand to be assistant of national coach Winfried Schaefer in 2012 when the War Elephants finished second in the Suzuki Cup.

Polking and his men arrived in Bangkok from Singapore yesterday.

The team will receive 26 million baht in bonus for winning the title from Nualphan and her associates.

They have got 10 million baht from Football Association of Thailand (FAT) president Somyot Poompunmuang for beating defending champions Vietnam in the semi-finals, and US$300,000 (approx 10 million baht) in prize money from the Asean Football Federation (AFF).

"This is a New Year gift for all Thais," she said at Suvarnabhumi airport yesterday.

"This is the first step for Thai football to get through the crisis."

Nualphan, who is president and CEO of Muang Thai Insurance, gave the players gifts, which included luxury bags and watches, through a lucky draw before the final.

The 2020 edition of the Asean championship was postponed from last year due to the Covid-19 pandemic.

Thanks to his strikes in Singapore, Teerasil is now the event's all-time highest scorer with 19 goals, two more than retired Singapore forward Noh Alam Shah's tally.

"Naturally, I am happy to win the title for the third time. We worked hard for each other. Now all teams in the region have improved and the competition is getting harder and harder," said Chanathip. 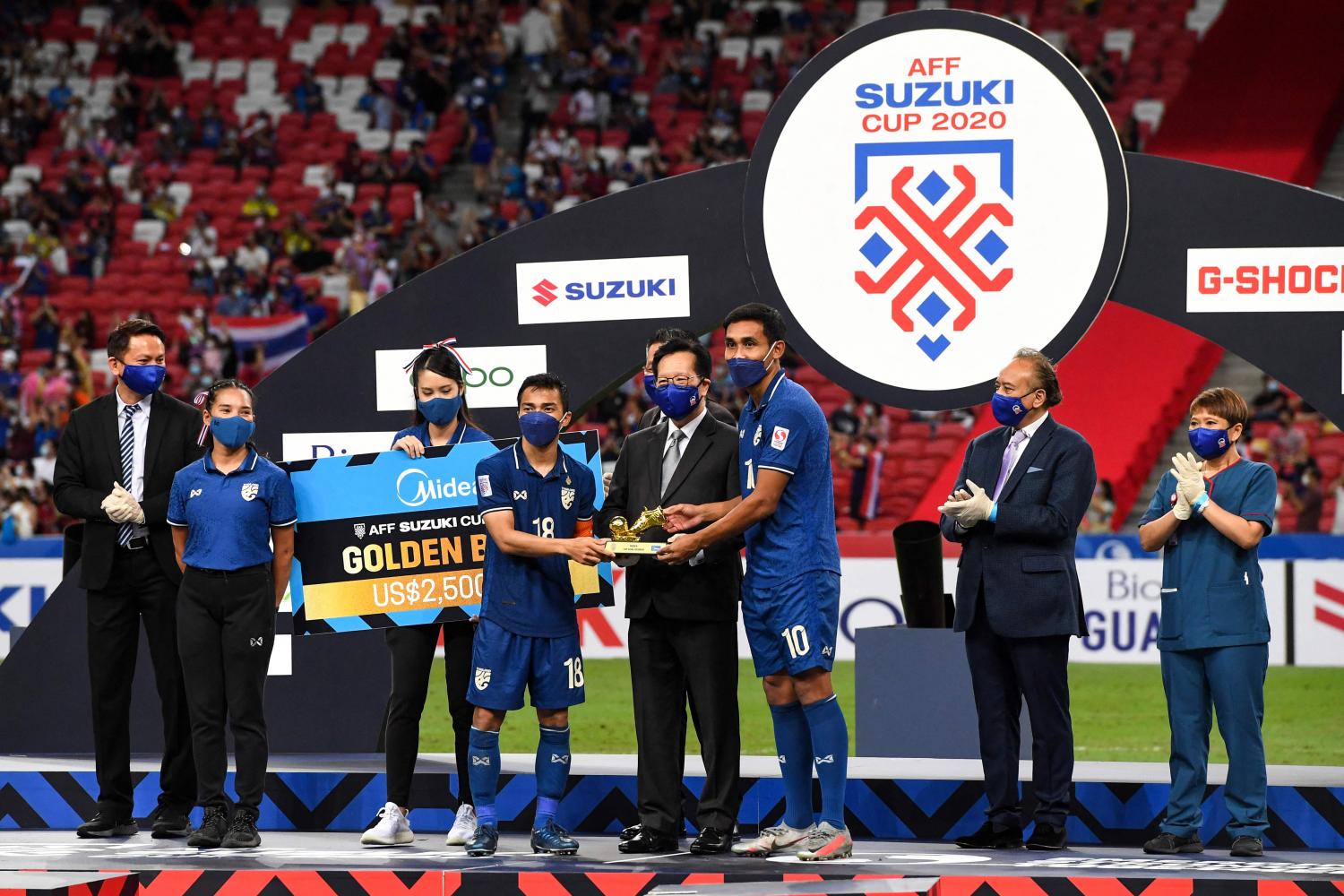 "Every [Thai] player wanted to help the national tram and also do it for their families and their supporters and we have done it.

"We will not stop developing and look more further than this."

Thailand have never played in the World Cup finals and never won the Asian Cup.

On Saturday, with Thailand on a four-goal advantage from the first leg, it was always going to be a mountain to climb for Indonesia to stage a comeback.

But just eight minutes in, Indonesia gave themselves the best of start when midfielder Ricky Kambuaya fired in a stiff grounder that slipped off the hands of Thai goalkeeper Siwarak Tedsungnoen and into goal.

The lead for Indonesia would last all the way into the second half before a three-minute blitz from Thailand saw them taking a 2-1 advantage.

Adisak Kraisorn equalised with a close-range finish in the 53rd minute and Sarach Yooyen's grounder three minutes later gave them the lead.

Ten minutes before the end, Egy Maulana equalised for the Indonesians.

"We will prepare better for the next edition. The next time, we won't be dark horses, we will be contenders," said the South Korean whose team eliminated hosts Singapore in the semi-finals.

Anyone interested in growing cannabis plants and hemp for home use will be able to do so without having to seek permission from the authorities as of next month, when both plants are due to be removed from the category 5 narcotics list, a Food and Drug Administration (FDA) official said on Thursday.

KYIV, Ukraine: Russia said Thursday that 1,730 Ukrainian soldiers had surrendered this week at the Azovstal steel plant in Mariupol, showing some emerging on crutches after an all-out battle that has become emblematic of the nearly three-month-old war.

Osaka returns to French Open with questions over form, fitness