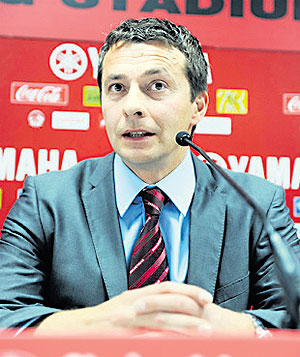 The former Chelsea player has signed a one-year, one million baht contract with the Kirins who finished third in the TPL last season.

Jokanovic is Muang Thong's sixth coach in just over three years. During that spell, the club has used five coaches from five different countries _ Thailand, Belgium, Brazil, Portugal and England.

Muang Thong director Ronnarit Suewaja said: "Jokanovic was one of the coaches on our list. He has experience and we hope he can help our players gel."

Jokanovic, who coached Serbia's Partizan Belgrade from 2008-2009, said: "I didn't hesitate when I received an offer from Muang Thong. I want to help the club improve and win the Thai league."

Thailand must beat Oman in the last match in Asia/Oceania Group D in order to progress to the next round.

"Every player is looking forward to the match and we can beat Oman with our teamwork," said the German coach.

"Beating Oman will be difficult but we can do it if we have a bit of luck."

The match kicks off at 4.30pm Thai time and will be live on Channel 9.