Well-known Muay Thai boxer and two-time K-1 champ Buakaw Por Pramuk has disappeared from his training camp because of chronic injury and feelings of fatigue, his manager said Friday. 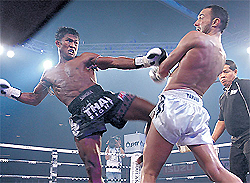 SUPERSTAR: Buakaw Por Pramuk, left, is the pride of Thailand and its traditional martial art of Muay Thai.

Teerapat Rojanatan insisted he did not have any conflict with Buakaw and his disappearance had nothing to do with financial issues or a lapse in discipline by the Muay Thai great.

"Buakaw has suffered chronic injury but he is well-disciplined and so determined in his training routines that I cannot help worrying about him," he said.

Buakaw, a Surin resident who won last year's welterweight Thai Fight grand final on points against Australia's Franki Giorgi, has been missing, along with his new BMW sedan, since March 1, according to Mr Teerapat.

Mr Teerapat earlier said he was mystified and did not know why the popular boxer would have left the camp without telling him.

He said Buakaw had received many invitations sent by respected and powerful figures to appear at social events. Rejecting those invitations due to Buakaw’s already tight schedule often made him and the boxer feel uncomfortable.

"I don’t want to say anything much about this because I fear this issue will escalate. But I want to explain that those 'Khun Khor Ma' (You ask for it) programmes have made us feel uncomfortable several times," he said.

Buakaw’s manager also denied reports that there had been a rift among staff in the Por Pramuk camp after Theerapat Yewyim, a physical therapist, resigned.

He said Theerapat was one of the best physical therapists in Thailand and his resignation was a result of a disagreement over work methods, not personal conflict.

The manager also said earlier that money was not an issue.

"Buakaw has never acted like this before, and as for the money issue, I've never left him unpaid. I always paid him," said Mr Teerapat.

"I want him back quickly. His disappearance will hurt him in the end because I've now cancelled many of his events."

These included Buakaw's scheduled bouts in England and France.

Buakaw's sister Kanyarat Banchamek, 40, said she first learned that her brother was missing when she saw a television news report on Friday morning.

"If he's safe, he should contact his family because people are worried about him," Mrs Kanyarat said.

Buakaw's relative Sao Thongdard, 49, said he was concerned for the boxer's safety as he might have a lot of money and there might be people who might have bad intentions toward him.

Buakaw's father Leng Banchamek, 62, said everyone hoped that nothing bad was happening to his son.

The YouTube video clip, uploaded by vg2135 and pasted below, shows Buakaw's rigorous training and bouts with different fighters throughout his career.