Buriram United chairman Newin Chidchob has vowed to continue his bid to find out if there are financial irregularities in football management. 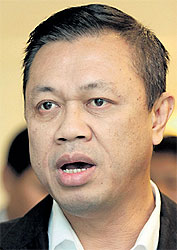 During a meeting of representatives of Thai Premier League clubs last month, Newin asked TPL chairman Vichit Yamboonruang about the broadcasting rights of TPL matches and other income but Vichit could not give an answer.

Newin wondered where the money had gone because TPL clubs have received only small sums from the two governing bodies.

Siam Sport Syndicate executives, including chairman Ravi Lothong, have since admitted on a couple of occasions that the firm is responsible for managing the TV rights and other income regarding the domestic league for the TPL.

The executives said the operation was in red and challenged any party to bid for the job. They reportedly mentioned Newin's name in their explanations.

Newin yesterday hit back at Siam Sport Syndicate and argued that he had never asked the group for an explanation.

In an open letter to football fans, FAT president Worawi Makudi and Vichit, he said he had not known before that Siam Sport Syndicate was overseeing financial matters for the TPL and that he believed few people had known this before.

He said Vichit must give a clear-cut explanation and not Siam Sport Syndicate.

Newin said he was ready to meet Siam Sport, TPL and FAT bosses but representatives of TPL clubs, journalists and football fans must be allowed to attend such a meeting.

He vowed to continue his attempt to "find out the truth" and urged concerned parties to join his investigation.

"I will continue doing this until the truth comes out," he said.

He also promised that his attempt would not become a farce.

"I am not trying to seek personal gain," Newin said.

"I do not have personal problems or conflict with Siam Sport Syndicate, the TPL or the FAT. I am doing this for the sake of Thai football.

"You should not look down on football fans. Don't think that they are stupid."