The threat of hooliganism remains a key concern ahead of Euro 2012 in Poland and Ukraine, UEFA chief Michel Platini warned on Thursday. 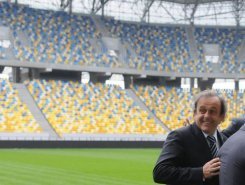 UEFA President Michel Platini speaks during a press conference at the National Stadium in Warsaw. The threat of hooliganism remains a key concern ahead of Euro 2012 in Poland and Ukraine, Platini warned.

"I foresee a great Euro. I always see a glass half full, not half empty. I see all the wonderful things linked to football, such as the great atmosphere there's going to be in Poland and Ukraine," Platini told reporters in the Polish capital Warsaw.

"I hope we won't need the police," he said, during a visit to the city's brand-new National Stadium, where the European championships kick off on June 8.

"But we all know that the world isn't as nice as I'd like it to be, so of course we need security, people to protect the stadiums, to look out for the hooligans who'll come, and that's why the Polish government has a security system in place," he added.

"If there's one thing that always worries me, it's security."

Poland's interior ministry on Thursday said that over 9,000 officers would be deployed specifically to ensure security, and not just in the four host cities.

Besides Warsaw, matches will also take place in the Baltic port of Gdansk, Poznan in the west and Wroclaw in the southwest.

Large numbers of fans are also expected to show up in the southern city of Krakow, where England, Holland and Italy will set up their training camps.

Polish police also plan to work with foreign law enforcement authorities' liaison officers who know who their own countries' troublemakers are.

To help keep the peace in the stadiums, meanwhile, Poland's PZPN football association has trained over 7,600 stewards.

Platini, who arrived in Poland earlier Thursday after a visiting Ukraine, underlined that UEFA and the host nations' authorities alike bear the responsibility for ensuring fans can watch matches safely.

"I said the exact same thing in Ukraine, to the Ukrainian president," he noted.

Poland has been cracking down on domestic hooliganism ahead of Euro 2012.

Long accused of failing to do enough to tackle a hardcore estimated by police at up to 5,000 in this nation of 38 million, Polish authorities were stung into action after last May's violence-marred Cup Final.

A ban on away fans was imposed for last season's remaining handful of matches from the first division downwards, and ad hoc sanctions have been put in place for several clubs this term.

The authorities have beefed up electronic tagging and stadium bans on individual hooligans.

But the broad-brush approach has faced criticism from ordinary fans who claim they are being targeted as a group as the authorities strive to prove their mettle.

Beyond hooliganism, other concerns remain.

In Ukraine, Platini lashed out at "bandits and crooks" amid a furore over sky-high accommodation costs fans face there.

Asked about the situation in Poland, Platini said: "I complained in Ukraine. In Poland it's about right."

Euro 2012 marks the quadrennial tournament's first edition behind the former Iron Curtain, with Poland and Ukraine dogged by doubters since pipping favorites Italy in the hosting race in April 2007.

They have faced vast infrastructure challenges, but with less than two months before the 16-nation championships kick off, Platini was sanguine.

"Things have been a bit more complicated in Ukraine than in Poland. But just like in Poland, they've done a fantastic job," he said.

"We organisers are always demanding, because we want things to go faster, but there are times when things get in the way, meaning it doesn't go as fast as you'd like. But we know that in 54 days everything will be ready, both in Ukraine and Poland," he added.

"Everything is under control," he said.

Thai Uber Cup stars bow out to China in semis