Australian tennis player Bernard Tomic is well-known to traffic police in his native Queensland for the bright orange BMW coupe that has landed him in repeated trouble with the law. 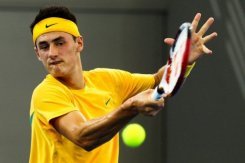 Australian tennis player Bernard Tomic, pictured on April 8, is well-known to traffic police in his native Queensland for the bright orange BMW coupe that has landed him in repeated trouble with the law.

Now the youngster's reputation has apparently followed him to his new tennis base in Monte Carlo, but the teenager says he has no plans -- as yet -- to get behind the wheel of anything.

Tomic, 19, is far from unknown in the principality, the tax-free home of dozens of his fellow ATP players.

In fact, one policeman on the local beat seems to know more about the Aussie than might be expected.

"A policeman here, he pulled my dad over while walking. The guy asked him for his licence. Just a random check," Tomic revealed after reaching the second round of the Monte Carlo Masters on Monday.

"The guy followed tennis, and he asked: 'How is it going with the car?'"

That query referred to the uproar created by Tomic back home in January, when he was stopped twice on Australia Day by police for what they said were unauthorised trips in his powerful car on a learner's driving permit.

The uproar resulted in a police stand-off and intervention by local politicians, along with a court appearance for the player that forced him to miss a European tour swing in February.

Tomic said his notorious BMW, which he had been trying to sell, remains in Queensland as he focuses on a new life in Europe.

There is temptation, with the motor-mad teen living not far from a Maserati dealership in the VIP principality, but so far he has resisted the urge to buy a car.

"This is my new home," he said of Monte Carlo. "This is where I have to spend most of my time. Australia is too far to travel.

"Last year when I was visiting a lot to finish the paperwork, I managed to see a lot of players. I saw Tomas Berdych, Thomas Johansson. A lot of tennis players live here."