PATTANI - A shared passion for football is uniting Buddhists and Muslims in the far south, where grassroots efforts to find elusive peace are gaining ground after years of bloodshed.

Unmissable in their bright orange shirts, the players of local side Pattani FC exchange banter almost as fast as their passes around the training pitch.

It is a scene familiar to football clubs across the world. But Pattani play in far from ordinary circumstances.

The Division Two team's hometown is in the heart of an area riven by a raging insurgency that has claimed more than 5,000 lives since 2004 in near-daily bomb or gun attacks against both Buddhists and Muslims.

Despite the violence off the pitch, for Pattani's players all that matters is scoring goals. 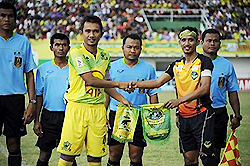 Captains of the Pattani FC football club (left) and Narathiwat FC team exchange flags ahead of a match at the Rainbow stadium in Pattani, in Thailand's troubled south. A shared passion for football is uniting Buddhists and Muslims in the deep South, where grassroots efforts to find elusive peace are gaining ground after years of bloodshed. (Photo AFP)

"We are not divided, whether Muslim, Buddhist or Christian. We are all friends," said Samae Samak, a young Muslim.

As the government struggles for answers to end the seemingly intractable conflict, local peace moves are gathering pace.

The country's obsession with football comes second only to Thai boxing, except in the deep south where it is even more popular and provides a rare space for often-divided communities to come together.

"In Pattani, no matter how far away people live or if there have been incidents, they come to watch football matches," said Pitsarok Rujakat, a Buddhist player, originally from the north of the country.

Recent attacks have seen tensions rise across the troubled region: on March 31, bomb blasts left 15 dead and hundreds wounded in the cities of Yala and Hat Yai.

The explosions, which targeted civilians, appeared to mark an escalation in the campaign by the Muslim militants, who often target soldiers with makeshift roadside bombs.

Monks and teachers -- seen as a symbol of the state -- are also sometimes attacked while out collecting alms or travelling to work.

Human rights groups accuse the army of carrying out reprisals in villages suspected of harbouring the suspects, perpetuating the cycle of violence.

But those pledges have remained unfulfilled and most of the three provinces have been under a state of emergency since 2005, with locals subject to deeply unpopular laws allowing 30-day detention without evidence.

Governors and senior army officers are mostly Buddhist and appointed from outside the region, fuelling resentment among the Muslim-majority local population.

Despite recent conciliatory overtures, the government has failed to find a path out of the chaos.

In late April, Yingluck met local religious leaders and military officials, promising an injection of money for education, sports clubs and small businesses in the hope of easing tensions, but activists are sceptical.

"The main problem is martial law and the massive army presence," said Huda Longdewaa, president of the Southern Association of Women for Peace.

Ms Yingluck "talked about sending more troops, but this can't solve anything."

Where the government struggles, localised efforts at peace are gaining traction.

In the village of Bangma in Pattani, soldiers started a month ago to visit a mosque every week to discuss about the conflict with its imam and learn the basics of Islam and the local language, Yawi.

They also share ideas on the region's economic problems and distribute medicine for the elderly.

"They do not know much" about Islam, said the Imam Kono Samae. "They come to study local traditions and are trying to understand them."

But for many on both sides, true reconciliation seems a long way off.

Recent reports of affairs between local Muslim women and Buddhist soldiers sparked anger among villagers, highlighting the divide that needs to be bridged for peace to take root.

"Our cultures are very different, women, family... it takes a long, long time to understand those differences," says Thai army Captain Worayuth Boonyakait after a meeting with the Bangma imam.