Alex Oxlade-Chamberlain is hoping to carry on England's recent tradition of successfully unleashing teenage tyros at major tournaments when he heads to Euro 2012 next month. 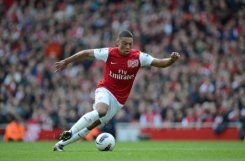 Arsenal's English striker Alex Oxlade-Chamberlain is hoping to carry on England's recent tradition of successfully unleashing teenage tyros at major tournaments when he heads to Euro 2012 next month.

From Michael Owen's electrifying performance against Argentina at the 1998 World Cup to Wayne Rooney's dazzling displays at Euro 2004, England have been unafraid to give youth its head at international level.

While there are risks in picking unproven talent -- witness Theo Walcott's inclusion in England's 2006 World Cup squad -- Oxlade-Chamberlain has done enough in his short career to suggest that his selection might pay off.

Used sparingly by Arsenal this season following his transfer from Southampton, the 18-year-old demonstrated frequent flashes of precociousness in his 16 first team appearances.

A sparkling performance for Arsenal in their 3-0 Champions League win over AC Milan in February persuaded England manager Roy Hodgson that the attacking midfielder deserved a place in his squad.

Hodgson is adamant that Oxlade-Chamberlain's selection will not be a repeat of Walcott's ill-fated sojourn in Germany six years ago, when the teenager never kicked a ball during England's campaign.

"It won't be easy for him to break into the team but the only way I'll find out is to sling him in at the deep end," Hodgson said. "Even if he doesn't swim now, he'll learn to swim in the future.

"I wouldn't have chosen him if I didn't think he was ready to start games."

Oxlade-Chamberlain, whose father Mark won eight caps for England in the early years of Sir Bobby Robson's reign, is determined to make an impact in Group D.

"I will just try and make things happen, although I know there are other players who can do that. It will just be nice to get the opportunity and I will see what I can do," Oxlade-Chamberlain said.

"I think I play with no fear, I run at players regardless of who they are and try to make a difference. I have a youthful enthusiasm and I am so excited about this that I will try and take any opportunity with both hands.

"It is a good opportunity for me to go and learn from everyone and if I do get a chance, work as hard as I can to make an impression and prove myself."

Arsenal manager Arsene Wenger is also confident that the powerfully built prodigy will not feel out of place in the Euros.

"He is a little bit like a boxer in his upper body," Wenger enthused. "He has not played too many games up until now because he was on a learning curve but he has a super quality and is not fazed by the biggest occasions.

"To put him in the team against any opposition... it is just natural for him to be there. For a young player, sometimes they waste a lot of time getting used to the pressure. He looks like he can take it.

"There are very few players like that, players who look like they have always played in the team."

No room for niceties as Suarez and Liverpool reunite again