Top seed Saina Nehwal of India and unseeded Sony Dwi Kuncoro of Indonesia yesterday claimed the titles in the respective women's and men's singles at the SCG Thailand Open 2012. 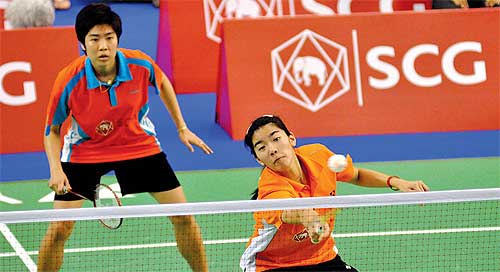 Saralee Thoungthongkam, left, and Lam Narissapat in action during the women’s doubles final.

World No.5 Nehwal's victory came at the expense of local favourite Ratchanok Inthanon at the fully-packed CU Sports Complex.

The Indian lost the first set 19-21 before fighting back to win the next two sets 21-15 and 21-10 to win her second title of the year after previously triumphing in Switzerland.

The three-time world youth champion Ratchanok, who was in her first Thailand Open final, admitted that Nehwal was physically stronger and deserved to win.

"She controlled the game better and was more focused in the second and third sets," said the 17-year-old Thai.

"I tried to win it in two sets but couldn't make it happen and I was then a bit tired in the decisive set."

Ratchanok only had one week to prepare for the US$120,000 tournament after injuring herself during the Uber Cup in China last month.

Nehwal's victory was her third win over the Thai youngster in four meetings. She received a winner's cheque of US$ 9,000 while Ratchanok picked up $4,560.

Despite the loss, Ratchanok believes the tournament was good preparation ahead of the Olympic Games in London.

In the men's singles, three-time Asian champion Dwi Kuncoro of Indonesia, who upset world No.2 Lin Dan of China in the semi-final, went on to claim the title with a 21-17, 21-14 over Chen Yuekun of China.

It was another disappointing result for the second seed Thai pair who have now lost in the final on four occasions.