Olympic weightlifting champion Prapawadee Jaroenrattanatarakoon has been surprisingly axed from the Thai squad for the London Games. 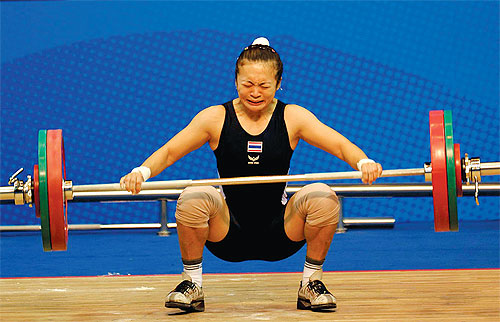 The Thai Amateur Weightlifting Association announced its seven athletes for the 2012 Olympics yesterday and Prapawadee, who won the women's 58kg gold in Beijing, and Pornchai Lopsri have been dropped from the team.

Tawa president Maj Gen Intharat Yodbangtoey said the association made its decision based on 10 factors which included international results and records at training.

Prapawadee was not selected because of her poor performance during training, he said.

"Her record during training has not been good," Intharat said.

"We considered all factors and Prapawadee would only have an outside chance of winning a medal in London."

However, her absence may not be a big surprise judging from the fact she has suffered a slump in form since the 2008 Olympics mainly because of a series of injuries.

Athletes from China and Belarus are seen as their major threats.

"With a good game plan, we have a high chance of winning gold in the women's 58kg," he said.

In the men's event, Intharat said Jatuporn could be Thailand's first male lifter to win an Olympic medal.

Weightlifting has been one of Thailand's most successful sports at the Olympics.

Khassaraporn Suta became the country's first Olympic medalist in the sport when she won bronze at the 2000 Games.

The Thai weightlifting team will leave for London on July 23. There will be 15 golds in weightlifting (eight for men and seven for women) in the London Games scheduled from July 27-Aug 12.

Meanwhile, windsurfers Ek Boonsawat and Napalai Thansai are the first Thai athletes to arrive at the 2012 Games after they left for London last night.

Thais to go all out for victory