Rory McIlroy is ready to cope with bad weather and links golf at this week's British Open after ripping into both a year ago following a disappointing Open result at Royal St. George's. 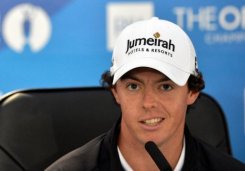 Rory McIlroy of Northern Ireland speaks at a press conference at Royal Lytham & St Anne's in Lytham, ahead of the 2012 British Open Golf Championship which begins on July 19.

The 23-year-old Northern Irishman, who took the World No. 1 ranking for the first time in his career earlier this year and spent seven weeks at the top, took out his frustrations over poor play last year on the rain and course.

"These conditions I just don't enjoy playing in really. That's the bottom line," McIlroy said at the end of a rainy 2011 Open in Sandwich. "I would rather play when it's sunny and not much wind.

"All the amateur tournaments I've won, they were played on links courses but they were all relatively calm. So I just play better and my game is more suited to calm conditions."

McIlroy, who had taken time off after winning the US Open a month before, seemed to forget that he often played in poor weather growing up in Ulster, portraying himself much differently after a frustrating share of 25th.

"I'm not a fan of golf tournaments that the outcome is predicted so much by the weather. It's not my sort of golf," he said. "I'm looking forward to getting back to America."

Faced with another deluge of wet weather on a links course this week at Royal Lytham, McIlroy looked back with humbled eyes about his 2011 outburst.

"Those comments were just pure frustration," McIlroy said on Tuesday.

"Having really high expectations going into it, coming off a major win, really wanting to play well, get into contention and not doing that and blaming the weather, the draw, blaming my luck basically -- that was just frustration.

"Looking back on it a year later, it's as I said, I just didn't play well enough to get into contention and didn't handle the conditions as best as I could have. That's something I'm trying to do more of."

But as he tours the first two days with 2010 British Open winner Louis Oosthuizen of South Africa and 2011 PGA Championship winner Keegan Bradley of the United States, McIlroy realizes he must keep his cool in the wind and rain.

"If it's like that again this week, you're just going to have to knuckle down and focus and keep fighting and stay tough and try and shoot a score in bad conditions," McIlroy said.

Second-ranked McIlroy, who won at Hong Kong and Shanghai last year as well as the US Open, won the Honda Classic in March and was twice a runner-up, taking the top spot in the rankings briefly from England's Luke Donald.

But McIlroy has missed the cut in four of his past six starts.

"I got the World No. 1 after I won a major, so I don't think my game has completely went off," McIlroy said. "Everyone has bad spells. I had a couple bad weeks where I didn't play so well but it's just a little blip in the radar."

In his most recent outing, McIlroy shared 10th in the Irish Open two weeks ago.

"I feel like I'm hitting the ball great. I think it's the best I've swung the club all year," McIlroy said.

"It's keeping the ball in play, keeping it out of the bunkers and out of the rough. I can do that, if anyone can do that in this field, they have got a great chance."

One thing McIlroy had to cope with at last year's Open which will be absent this time around is the pressure coming off a first major title and grandoise talk of rivaling the 18 majors of Jack Nicklaus or the 14 won by Tiger Woods.

"It's been lovely just going about my business," McIlroy said. "It has been nice to prepare and definitely not the madness that was going on last year. I have tried to keep it as low key as possible."