The 33-year-old comfortably beat Great Britain's David Smith 7-0 in the mixed individual BC1 final at the ExCel Arena after he had won gold in the mixed team BC1-2.

On Friday night, Saichon Konjen finished third in the 400m wheelchair racing T54. Unfortunately, he was later disqualified for stepping on a line.

Thai Paralympic chief Chutinant Bhirombhakdi yesterday took the rest of the team to a tour of Chelsea's Stamford Bridge stadium. 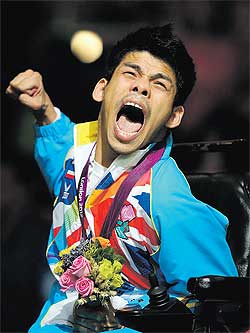 Chutinant is an executive at Singha Corporation which is a global partner of the English Premier League football club.

Saysunee and Rungroj were interviewed by Chelsea staff and their talks will be aired on Chelsea TV.

The Thai contingent will arrive home on Tuesday and will join the government's reception party that evening.

London 2012 organisers yesterday promised an emotional celebration to bid farewell to the Olympics and Paralympics, as the curtain falls on a summer of elite sport in the British capital.

Coldplay will headline this evening's show, entitled "Festival of the Flame", which will draw heavily on Britain's rich history of cultural, musical and seasonal festivals, artistic director Kim Gavin told a news conference.

"The only narrative we have got is that we are taken through the seasons to the Coldplay music. It's not just a concert and we are not just looking at Coldplay," he added.

"We have got fantastic visuals and amazing stunts going on. It's a celebration and recognition of people coming together... What we have tried to do is bring something that feels very raw." BANGKOK POST/AFP

After some of the most dramatic declines in global financial markets since the Federal Reserve began lifting borrowing costs six months ago, authorities in Asia are stepping up efforts to prevent a downward spiral.