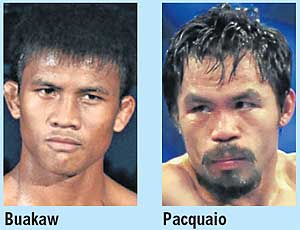 Somchai Charoensombat, with the backing of the Sports Writers Association of Thailand and boxing promoter Narongwas Buamas, came up with the idea and presented it to Charin Suankaew, president of the King Rama IX The Great Foundation. Dr Charin is in charge of organising the annual boxing show.

His Majesty's 85th birthday will fall on Dec 5 but no date has yet been set for the match.

"No matter how much [money] Pacquiao demands this fight, we will make it happen," Mr Somchai said.

Mr Somchai said contracts will be signed on Thursday in Manila.

However, the plan has raised eyebrows within boxing circles as Pacquiao is already scheduled to fight on Dec 8 in Las Vegas.

Also, Buakaw has so far competed exclusively in muay Thai. A fight with Pacquaio would be his first under international boxing rules.

"It would be tough for Buakaw to fight Pacquiao," admitted Damrong Simakajornboon, executive secretary of the Asian Boxing Council.