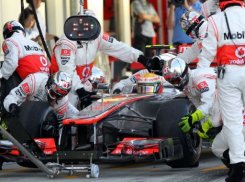 The Briton, who will quit McLaren for Mercedes next season, said his car seemed to be under-steering badly before an unexpected "thud on the rear" solved the problem and allowed him to put in a spell of competitive laps.

Hamilton finished fifth and with five races to go, lies fourth in the standings and 44 points adrift of the championship leader, Ferrari's Fernando Alonso.

"I still got some points which is the main thing. But a very, very unusual thing happened which I have never ever experienced before," said Hamilton.

"I struggled for the first 20-odd laps. I don't know if it was before the first stop or after, but through turn 14 I felt this thud on the rear and all of a sudden the car starting turning fantastically.

"So I was able to push and overtake guys, but it was bit late."

Red Bull's Sebastian Vettel won the race and is second in the title race, just four points behind Alonso who retired after an unlucky first-lap puncture.

Hamilton also insisted he backed off when overtaken early in the race by Sauber's Sergio Perez, his incoming replacement at McLaren, knowing the Mexican would try something "crazy".

Perez later tried to pass Hamilton a second time in the same place, but made a mistake and span out of the race.

"I saw him coming and I have a championship to fight for and he doesn't so..." said Hamilton, shrugging his shoulders. "I thought that he was going to do a crazy manoeuvre, which he did.

"Then when he was behind me again I saw it coming again so I moved a little to the inside, thinking that he was going to go up the inside and he just flew down the outside of me. So very interesting."