Wonder boy Sangmanee already on the road to greatness
Sports

Wonder boy Sangmanee already on the road to greatness 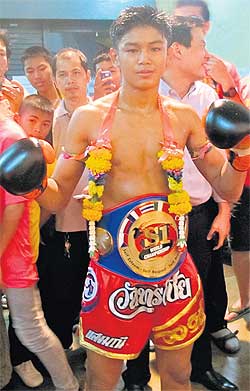 Sangmanee was one of several superstars contesting 10 world championship fights in the Battle of Wansongchai event at Rajadamnern Stadium last Thursday night.

Joining the serious punters, who filled the standing areas, were scores of excited teenagers who thronged and screamed for their hero Sangmanee, already dubbed the "students' idol" by the Thai press.

Sangmanee has been fighting since he was 12 and now, at just 15, is regarded by many as the best 110lb Muay Thai fighter on the planet.

Matched against Kusakornnoi Sor Julasen, the young firebrand streaked to an unassailable points lead, blasting his opponents with some of the hardest push (teep) kicks to the midriff ever witnessed in any Bangkok stadium.

Sangmanee is the total fighting package. More than a gifted fighter, he's a body and mind arsenal that moves as smoothly a Swiss watch.

The way he went about his business _ winning every round of the world championship _ was quite extraordinary.

Beyond the screams and high school adulation, Sangmanee is a genuine champion who has already reached greatness and, amazingly, his best fighting years are as good as gold for a decade or more.

He is so talented that his family and management have persuaded him to turn to amateur boxing next year and focus on winning a boxing gold medal at the next Olympics in Rio de Janeiro in 2016. The reasoning is that he can return to Muay Thai with a decade of peak performance in reserve.

Sangmanee is one all-round brilliant fighter. His eye to limbs coordination is superb, as is his timing and peripheral ring awareness.

Muay Thai's loss may well be boxing's gain. But think of this: In four years' time when Sangmanee fights for Olympic gold he'll be a 19-year-old _ still a teenager. And after the Olympics, he'll be able to return to Muay Thai.