Two more skippers, including the only woman in the competition, on Friday abandoned the world's most gruelling yacht race, the solo, round-the-world Vendee Globe, organisers said. 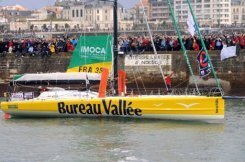 The monohull "Bureau Valle" skippered by French Louis Burton leaves the harbour before the start of the 7th edition of the Vendee Globe, the solo non-stop round-the-world yacht race in Les Sables d'Olonne, western France. Two more skippers, including the only woman in the competition, abandoned the world's most gruelling yacht race, the solo, round-the-world Vendee Globe.

French sailor Louis Burton, whose boat Bureau Vallee was hit by a trawler, pulled out after wind conditions made it impossible for him to return to Les Sables d'Olonne in western France to repair a damaged shroud -- rigging that holds up the mast.

The collision happened about 400 nautical miles (460 miles, 741 kilometres) off the coast of the Portuguese capital, Lisbon. The 27-year-old instead had to go to Corunna in northwest Spain, organisers said.

"I'm fine. I was inside the boat when it happened," she told organisers on a conference call on Friday morning to confirm that she would take no further part in the race, adding that she was disappointed.

Davies, who finished fourth in the 2008-9 edition of the competition, said the sea was still strong but she had enough fuel to get to Madeira using the boat's motor. She expected to reach the Portuguese island on Saturday.

Two, including Burton, have pulled out following collisions with trawlers, while one of the favourites, Marc Guillemot, also quit after the keel of his boat was badly damaged.

Britain's Alex Thomson, currently in fourth position, was quoted as saying in an interview with the Guardian newspaper publishedd on Friday: "To my mind, it's the most difficult sporting challenge that exists on the planet today...

"Something like 100 times more people have climbed Everest than have sailed singlehanded around the world, so that shows you how hard it really is."

Last time, there were as many withdrawals after nearly a week of racing but as there are fewer boats this time round, the ratio is higher.

It has not all been plain sailing for the 16 remaining competitors. Spaniard Javier Sanso, for example, is heading to Madeira after breaking part of his main sail's mechanism.