Schafer confident Thais will go through

Thailand coach Winfried Schafer insists Malaysia is a strong team but is still confident that if his team is injury-free, they will surely get through to the final of the AFF Suzuki Cup. 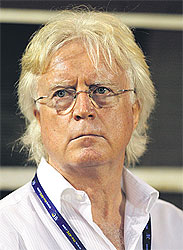 Thailand meet Malaysia in the semi-final, with the first leg to be played on Dec 9 and the second on Dec 13. Malaysia, the defending champions, finished second in Group B.

"Malaysia is a good team," Schafer said. "They have good teamwork and a good passing game.

"It is not easy for our team to beat them because when their supporters came to watch, the Malaysian team played with full capacity.

"However, if the Thai players are ready and no injury occurs, I believe that if the Thai players keep their standard and good fitness like the first round, we will be more dangerous team than the Malaysian team and there is nothing to be afraid of at all."

"The Malaysian attacking game depends on Safee but other players, we also cannot underestimate at all," Schafer said.

The president of the Football Association of Thailand (FAT), Worawi Makudi, believes Schafer will lead Thailand to the title.