Singapore won the Asean title for a record fourth time with a 3-2 aggregate win over Thailand despite the Lions' 1-0 loss in the second leg of the AFF Suzuki Cup final on Saturday night.

Thailand striker Kirati Keawsombut scored the only goal on the night in a one-sided match at a packed Supachalasai stadium but it was not enough to overturn Singapore's 3-1 win in the first leg on Wednesday.

It was a repeat of the 2007 final when Singapore won 2-1 in the first leg and held Thailand to a 1-1 draw at Supachalasai stadium in the Bangkok leg. 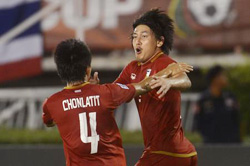 Kirati Keawsombut, right, celebrates with a teammate after scoring against of Singapore during their AFF Suzuki football Cup final second leg on Saturday. (AFP Photo)

Thailand coach Winfried Schaefer blamed the Thai Premier League season which he said was too long as one of the factors behind his men's unsuccessful Suzuki Cup campaign.

``Some of them were too tired because of the long domestic league but they gave their all for their country.

``I dont like second place and I really wanted to win the tournament. We played better but anything can happen in football.

He also blamed the Football Association of Thailand for arranging too few international warm-up matches for his men.

The German coach believes Thailand have a bright future and could become as strong as South Korea or Japan.

``We have a good team and can become stronger in the future. We will now look forward to the Asian Cup qualifying and we will have to start working hard soon.''

Singapore coach Radojko Avramovic said: ``I am very happy that we are No.1 of Asean football. We were a bit lucky in this match.''

Earlier, the Serbian coach confirmed that he would step down as coach of Singapore after the tournament.

At Supachalasai stadium, Singapore held a two-goal advantage and clung on despite near-relentless pressure from the spirited home side who were left to rue their missed chances.

Schaefer started with two strikers with Teerasil Dangda teaming up with Kirati. The War Elephants threw everything at the visitors and dominated the game but failed to break Singapore's defence until the final moments of the first half.

Kirati's bullet header gave Thailand's hope of winning the title for the first time since their their third triumph in the Southeast Asian championship in 2002. 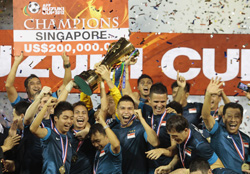 Singapore players celebrate with the trophy after winning the AFF Suzuki Cup 2012. (Photo by Patipat Janthong)

But they could not find a second goal, with Singapore's defence resolute in the face of wave after wave of Thai attacks.

Teerasil won a consolation award as the tournament's top scorer with five goals. However, he failed to find the back of the net in the final.

The Lions lost 1-0 on the night but won 3-2 on aggregate over the two matches, withstanding a manic finish that included four minutes of relentless Thai pressure in injury time to seal the title.

Thailand dominated throughout the first half, heading a ball off the woodwork at one point, before an unmarked Kirati Keawsombut brilliantly headed in a corner in injury time to put his side up 1-0.

The Thais lost 3-1 to the Lions in the first leg of the final on Wednesday and needed to score at least two goals to force extra time and stand any chance of ending a 10-year Asean title drought.

Both countries were vying to become the first four-time winners of the Southeast Asian championship, which was launched in 1996.

The War Elephants last won the biennial event in 2002, while Singapore's third title came in 2007 when they beat Thailand in the final.

"We surely can come back," Thailand coach Winfried Schaefer said before the match.

Schaefer conceded, though, that his team needed to attack from the start and stay focused throughout.

Earlier, Thailand captain Panupong Wongsa said he and his teammates would leave no stone unturned in pursuit of victory.

For Singapore coach Radojko Avramovic the victory was especially sweet, as he said earlier that he would be leaving his position after the match.

He also led Singapore to the third round of the Asian qualifying for the 2010 World Cup -- a first for the Lions.