Thailand coach Winfried Schaefer plans to mainly use players from the U23 side for this month's King's Cup tournament in Chiang Mai. 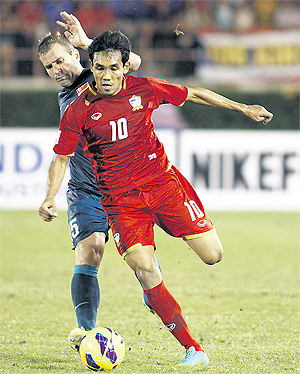 Teerasil Dangda is likely to be rested for the King’s Cup.

The annual four-team event will be held at Chiang Mai 700th Anniversary stadium from Jan 23-26 with the other three participating sides being Sweden, Finland and North Korea.

However, Thailand will begin their Asian Cup qualifying campaign next month and Schaefer does not want his players from the full national side at risk of getting injured.

"We want to rest some key players especially those who played in the AFF Suzuki Cup," said the German."They worked very hard for their clubs and country last year so they need a break. We don't want them to play in the King's Cup because they could get injured or be too exhausted for the Asian Cup qualifying round.

"We will mainly use players from the U23 team who will play in the SEA Games in Myanmar in December. We will also use some new players."

Among the stars who are likely to be rested are striker Teerasil Dangda and midfielder Datsakorn Thonglao.

Thailand lost 3-2 on aggregate to Singapore in the Suzuki Cup final last month. The full national team are likely to play the United Arab Emirates in a warm-up match in Hong Kong on Jan 31 ahead of their Asian Cup qualifier against Kuwait in Bangkok on Feb 6.

"I want the key players to be fresh and ready for the Asian Cup match," said Schaefer who is in Germany and is scheduled to return to Thailand on Jan 14.

Jong, 28, who currently plays for FC Koln in the second division of the German Bundesliga, is being transferred to Suwon Samsung Bluewings in the K-League, Suwon's General Manager Lee Ho-Seung said.

"We've reached an agreement with Koln to transfer Jong to us. Jong will arrive here as early as next Monday for a medical test. If he passes the test, we will sign a contract with him," Lee told AFP.

He made his professional debut with Kawasaki Frontale in Japan's J-League in 2006 and won his first cap for North Korea in 2007. He was part of the national squad that qualified and played in the 2010 World Cup.

Jong has racked up 15 goals in 28 games for North Korea, but his club scoring record has been lacklustre since moving to Germany in 2010. BANGKOK POST/AFP