Golden Boy, Bob Arum and Gary Shaw are the world's top three boxing promoters but only Shaw has crossed the line into the world of martial arts. 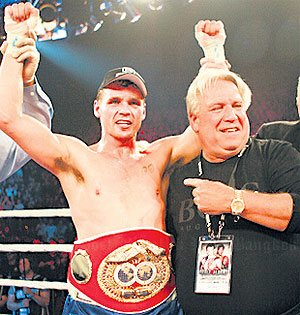 And Shaw insists that Muay Thai can learn a lot from the rise of K1 kickboxing and the MMA Ultimate Fighting Championship phenomenon.

Shaw compares Muay Thai to "delightful Thai cuisine _ hot and tasty" and UFC fighting in the cage as "McDonald's takeaway _ fast and ready to go".

According to Shaw, Thai restaurants and Muay Thai have been around for centuries. And while Thai boxing was able to adapt to the international boxing rules of a roped ring and boxing gloves, the sport needs to keep evolving.

"In boxing and Muay Thai, the battle is fought with two fighters standing up with gloves on making the knock-down with punches the main assignment, but Muay Thai has the X-factor of kicks, knees and elbows that adds excitement to the contest," he said.

But now, according to Shaw, the challenge for Muay Thai is to keep the pace of the fight at full-throttle for the five three-minute rounds.

"Five rounds is a lot less than 12 rounds of championship boxing," Shaw said.

Muay Thai is often criticised for its slow first and fifth rounds that are notoriously scored 10-10 with the boxers seemingly content to strive for a winning score in rounds three and four when the heat is on.

Shaw says K1 organisers "tried to be clever" by removing grappling and elbow-strikes from their tournaments.

Lack of grappling allowed the less hardened fighters to stay competitive in the kickboxing contests.

According to Shaw, the elimination of elbows as weapons also gave the Japanese and European kickboxers an advantage over the combatants trained in Muay Thai.

Shaw contends that it is not the Muay Thai rules that are holding back the sport _ rather it's how the first and last rounds are scored that spoil the sport as a popular spectacle.

If the judges scored the first round 10-9 or even 10-8 for the fighter who is the more aggressive, then that would make the fighters go harder from the start, he said.

But rules aside, Shaw contends the biggest obstacle for Muay Thai in the past and present is the ongoing perception that the Thai ring sport is fringe and boutique and not mainstream.

Shaw is the former frontman for ProElite, which took on the UFC in Mixed Martial Arts, but withdrew after a face-off with the UFC juggernaut that today totally dominates major TV and has become the fashionable sport for a new generation of fight fans.

While Shaw is now comfortable promoting elite boxers, exclusively, away from the cage, he does concede that, as far as young people are concerned, "the only game in town is the UFC".

"But you can't beat them any longer. They're miles ahead of everyone right now," he said.

"[Competing with them is] like coming up with some fast food franchise and beating McDonald's. It's not gonna happen."

Shaw has plans for a Muay Thai championship event in Las Vegas in March or April this year, but next week will be in Sydney focusing on the 'showdown' fight for the world IBF championship, featuring his latest world champion boxer, Daniel Geale.

But the Australian, who Shaw rates "as good as (Australian former world champion) Jeff Fenech" had to forfeit his WBA belt after being stripped of the title when Geale decided to fight Mundine _ his Australian rival _ rather than defend against mandatory No.1 challenger, Gennady Golovkincom.

As a promoter, Shaw's philosophy is "let the best fight the best and the results will sort itself out".

And, should Geale beat Mundine, as expected, he will be looking at challenging Sergio Martinez for the WBC belt.

But first, Geale has to beat Mundine, a proud indigenous Australian who excelled in rugby league before embarking on a professional boxing career.

Jan 30 is the must-win day for Geale, the boy from Tasmania, and Mundine, the footballer who wants to known as Australia's undisputed boxing king.

The Disease Control Department (DCD) on Thursday reported that 1,945 people fell ill and 103 others died after receiving various Covid-19 vaccines.

The country had 44 new Covid-19 fatalities and 3,644 new cases over the past 24 hours, the Public Health Ministry reported on Friday morning.