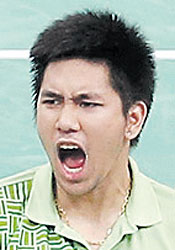 Ranked eighth in the world, along with his partner Maneepong Jongjit, in the men's doubles, Bodin has told the Badminton Association of Thailand that he wants to quit playing, according to BAT secretary-general Surasak Songworakulpan.

"He has informed me that he will retire," Surasak said.

The 22-year-old has been nursing a knee injury since December, which forced him to withdraw from this year's Korean Open and Malaysian Open.

The player also wants to look after his mother in Uttaradit, he said.

The win sent them to the 2012 Olympics, where they reached the quarter-finals.