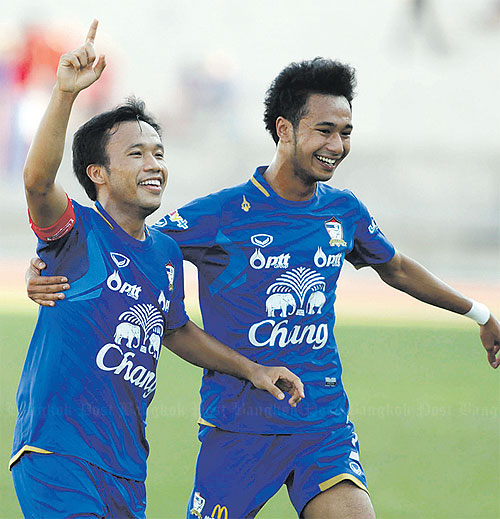 Hosts Thailand and North Korea earlier finished joint-third after a 2-2 draw in the play-off match.

Sweden took the lead after 22 minutes of the final when Tobias Hysen headed home Erdin Demir's cross from the left.

Veteran striker Mikael Forssell had a chance to put Finland on level terms but his shot was blocked by the Swedish defence.

Sweden doubled their advantage in the 72nd minute after substitute Robin Quaison intercepted the ball from the midfield and scored from 20 yards out.

Veteran captain Anders Svensson finished off a counter-attack move to make it 3-0 in the 89th minute.

In the earlier play-off for third place, Thailand and North Korea shared the honours after a 2-2 draw.

Striker Teerathep Winothai put Thailand ahead from the penalty spot in the 26th minute after Jon Kwang Ik fouled Adul Lasoh in the area.

Teerathep nearly turned provider for Thailand's second goal in the 43rd minute when he fed Chanathip Songkrasin, but the diminutive midfielder sent his shot wide.

North Korea equalised in the 58th minute when the Thai defence failed to clear a long ball into the box and substitute Jo Kwang volleyed home to punish the hosts.

The home team quickly regained their lead when substitute Thitiphan Puangchan, who came on for Adul, was brought down just outside the box and earned a free-kick.

A low strike from skipper Datsakorn Thonglao went under the North Korean wall and goalkeeper Ri Hyong Mu was left stranded as the ball went in at the left post.

North Korea refused to give up, though, and they pulled level for the second time through substitute Pak Yon Il in the 79th minute.

Chonlatit Jantakam came close to scoring the winner for Thailand but Ri made a great save with his foot.

"The players all helped each other very well.

"Players like Naruebodin, Chanathip and Thitiphan played very well, while a key player like Datsakorn produced one of his best performances today. He showed why he is such an important player."

"We're going in the right direction and if we prepare the team well, I am confident that we will beat Kuwait in the Asian Cup."

Roland Linz put SCG ahead in the 59th minute but Ryoichi Maeda equalised for Jubilo a minute later.