World number four Agnieszka Radwanska launched into unexpected criticism of incidents at the Fed Cup last week, alleging that "unfair" and irresponsible behaviour had taken place at the world team event in Israel. 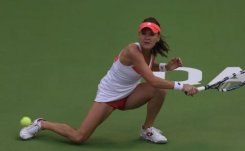 Agnieszka Radwanska of Poland hits a return to Anastasia Rodionova of Australia during their WTA Qatar Open tennis match on February 13, 2013 in the Qatari capital Doha. Radwanska launched into unexpected criticism of incidents at the Fed Cup last week, alleging that "unfair" and irresponsible behaviour had taken place at the world team event in Israel.

Whether Radwanska was referring to political demonstrations from the Israeli crowd in Eilat or differences with the home team after Poland's 2-1 victory over Israel was left unspecified, but there was no mistaking Radwanska's feelings.

"I was really disappointed," she said, when asked why Poland's post-match press conference in Israel had been so spectacularly brief.

"I didn't really expect something like this to happen on the tour, especially when a lot of teams were there and a lot of top players, and, yeah, a couple of things happened.

"You know, it's always sad and always unfair, as well. I think it's not a responsible way to behave," she said.

Last year Radwanska caused a stir at the Qatar Open by complaining about world number one Victoria Azarenka's on-court behaviour.

This time though, in the context of reports that sections of the Israeli crowd made noisy allegations about anti-Semitism in Poland, Radwanska's remarks had a far more sombre tinge.

Earlier she reached the last 16 in Doha with a 6-3, 6-2 over Anastasia Rodionova, a qualifier from Australia, and next plays Ana Ivanovic, the former world number one from Serbia.