As a large number of local fans are fed up with 'farcical' international Muay Thai bouts, former world boxing heavyweight champion Riddick Bowe has promised that his debut in the Kingdom's martial art will be for real. 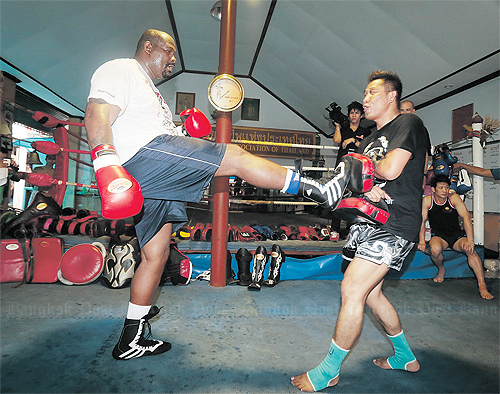 Riddick Bowe tries a kick during a training session yesterday; below: Bowe takes a break during practice. 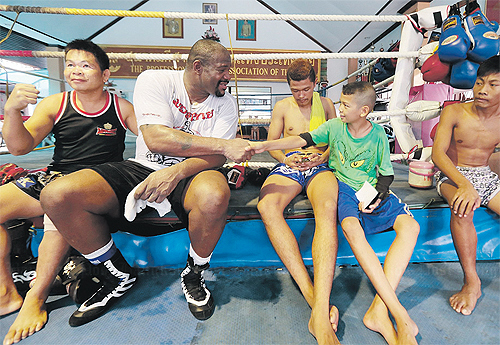 "Those who enjoyed my fights 10 years ago will again enjoy my Muay Thai fight," said Bowe, who will take on Russia's Levgen Golovin for the WBC and WPMF super-heavyweight titles on June 14.

"I want to make history as the first fighter who wins the heavyweight titles in both professional boxing and Muay Thai."

In his boxing career, the former two-time heavyweight champion had an impressive record of 43-1-0 with 36KOs. He was the first fighter to beat Evander Holyfield.

While Muay Thai is different from boxing, Bowe believes he can do well in the Thai sport.

"I have watched Muay Thai bouts but actually I was only introduced to it three months ago," said the 'Big Daddy', who will return to the ring for the first time since 2008.

"Muay Thai and boxing are close to each other and I can kick and use elbows."

Bowe arrived in Bangkok last week for one month of training before fighting Golovin and he hopes to help make Muay Thai more popular around the world, particularly in the US.

"I am like a Muay Thai ambassador. If I do well here, I will keep doing it and coming back to Thailand," the 45-year-old American insisted.

Bowe, who is visiting Thailand for the first time, said he was impressed by the country and its people.

"It will give my all because this is my second career," he said. "Don't miss my fight."

Somphob Singhasiri, the organiser of the June 14 Muay Thai Superfight Champions 2013 event, said people around the world will see Bowe fight as it will be televised live internationally.

"All fights in the event will be competitive. I am sure that fans will enjoy watching our tournament," he said.

Somphob added that in the past, many international Muay Thai bouts were one-sided.

"This can damage the sport," he said. "I can assure you that all our fights will be close."

The event is backed by Thailand's Grand Prix group, which organises the annual popular Motor Show.

"With its support, everything is going well and many sponsors are coming to us. We target both local and international audiences," Somphob said.

Somphob believes the tournament will be a success and he is looking forward to organising a women's Muay Thai tournament in August.

"Our plan is to host four tournaments this year," he said.

Somphob said he had approached Holyfield to fight here but he was not available.

"It is a good start with Bowe in our tournament," he said.

Foreigners resumed selling in Asian equities ex-China stocks in September - including $653 million's worth from Thailand - as investors were deterred by US interest rate hikes, a firmer greenback and a weaker regional growth outlook.