The nationwide unrest that has swept Turkey with the focal point in Istanbul will not have any bearing on the city's attempt to host the 2020 Olympic Games, the bid team told AFP on Wednesday. 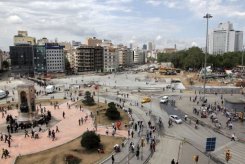 People walk in Istanbul's Taksim Square on June 12, 2013. The nationwide unrest that has swept Turkey with the focal point in Istanbul will not have any bearing on the city's attempt to host the 2020 Olympic Games, the bid team told AFP

The statement came after two International Olympic Committee (IOC) members told AFP under condition of anonymity they were no longer certain to vote for Istanbul, who are competing for the Games against Madrid and Tokyo.

Their doubts have grown since police cracked down heavily on May 31 on a campaign to save Gezi Park, near Istanbul's historic Taksim Square, from redevelopment.

Opponents accuse Erdogan of curbing freedoms and of pushing conservative Islamic values on the mainly Muslim but constitutionally secular nation.

Erdogan -- who remains the country's most popular politician and has won three successive elections garnering nearly half the vote in 2011 -- said on Tuesday that four people, including a policeman, had died in the unrest.

Nearly 5,000 demonstrators, many of them young and middle-class, have been injured.

The two IOC members echoed the same concerns at the level of anger expressed over the redevelopment.

"If this is an indication of people's disquiet over a shopping centre being built then one fears for what the protests might be if Istanbul win the Games and building work begins on the venues," said one.

"Similar protests would not be very good for the image of the IOC and could also drag us into endless delays over the construction of the venues and the infrastructure."

The Istanbul bid has run an effective campaign, based on strong government support both financially and politically, the relatively strong economy and the allure of it being a city that embraces Christians and Muslims.

The bid team maintained that all their building projects enjoy widespread support.

"This situation will have no bearing on our ability to deliver our Games concept, which was designed after extensive consultation with environmental groups and NGOs," the statement read.

"That consultation process will continue in partnership with the national and municipal authorities throughout the construction programme.

"We are as confident as ever that we can deliver the Games without risk and to world-class standards, just as Turkey has done for over 40 major international sports events in the last seven years."

The bid team -- which is headed by businessman Hasan Arat -- said the latest polls showed how much the possibility of hosting the Games had energised the citizens of the city.

"What is most important is that the people of Istanbul and Turkey believe in the Games," they said.

"The latest IOC poll put public support in Istanbul at 83 percent -- very few bid cities have ever had that kind of backing. Our bid, and the 20-year dream of the Turkish people, will not be affected by these events."

The bid team, who highlighted that both the Mediterranean Games in Mersin and the FIFA Under-20 world championships also in Turkey were due to go ahead as planned from next week, believed, too, that not all IOC members were wavering.

Indeed FIFA issued a statement later on Wednesday saying they were satisfied after being in constant touch with the tournament organisers.

"According to the information they (the organisers) provided, the incidents deal with a domestic issue based in two contained areas in Istanbul," FIFA said.

"It is not foreseen that the tournament locations are affected. The LOC will continue its close cooperation with law enforcement and will regularly update FIFA.

"Safety and security is one of the most important matters in the preparation of any major event."

However, an international sailing regatta scheduled to be held in Istanbul later this month has been postponed by the organisers of the Extreme Sailing Series.

"After consultation with our partners in Istanbul, the decision has been taken to postpone Act 4, Istanbul, to give best support to Istanbul's Olympic bid," they said.

Another IOC member, though, supported Istanbul's assertion that not all members were wavering.

"September (7, when IOC members vote on the 2020 hosts at a meeting in Buenos Aires) is a long way away yet and if this is resolved quickly then members will soon forget. That is the nature of the beast," he told AFP.

Champions, leaders to clash their swords

Police eye a tie at Suphanburi