Jamaican sprint star Veronica Campbell-Brown, embroiled in a doping scandal that rocked her homeland, issued an apology Tuesday but also said she was shocked to have tested positive. 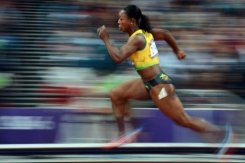 Jamaica's Veronica Campbell-Brown competes in the women's 200m semi-finals at the athletics event during the London 2012 Olympic Games on August 7, 2012 in London. Campbell-Brown, embroiled in a doping scandal that rocked her homeland, issued an apology Tuesday but also said she was shocked to have tested positive.

Three days after Jamaica's Gleaner newspaper and Television Jamaica said Campbell-Brown had tested positive for the banned diuretic lasix, Jamaican track officials confirmed she had accepted a ban while a probe is conducted.

Shortly after, a statement from the two-time Olympic 200-metres champion's management team declared, "Veronica is not a cheat," and "her faith, which rests not in device or creed, will see her through this dark period."

"Due to her determination to vigorously pursue the clearing of her name, she will desist from being vocal suffice it to say, while not accepting guilt of wilfully taking a banned substance, she wholeheartedly apologises to her family, Jamaica, her sponsors, the governing body, the world athletics family, her supporters as well as those she worked with in various non-athletic causes for any embarrassment and or hurt this devastating news has caused," it said.

Saying Campbell-Brown believed that "unearned suffering has redemptive qualities," the statement said she was surprised to have had banned substances in her system when tested after a May 4 victory at Kingston.

"That she should now be accused of infringing on anti-doping rules is a shock to her," it said.

Jamaican Athletics Administrative Association (JAAA) president Warren Blake said Tuesday that a disciplinary panel is being assembled to hear her case and she accepted a provisional suspension while her case is being investigated.

No timetable was given for a decision from the panel.

Campbell-Brown will not compete at this week's Jamaican championships, the qualifying meet for the world championships at Moscow in August. She also withdrew from the June 29 Edmonton International Track Classic in Canada.

The Gleaner reported that Campbell-Brown would not defend her 200 world title at Moscow after positive "A" and "B" samples were taken from the Jamaica Invitational, where she won the 100 title in 11.01 seconds.

Campbell-Brown, who turned 31 a month ago, won Olympic 200 gold in 2004 at Athens and 2008 at Beijing but finished fourth last year at the London Games behind Allyson Felix of the United States.

With a bronze in the London Olympic 100m and silver as a member of the 4x100 relay last year, Campbell-Brown raised her total to 16 medals in world championships and Olympic Games.