One may think that swimming is mainly about physical strength but a former Australian Olympian sees it the other way round. 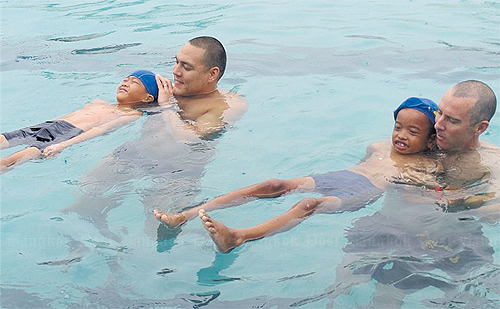 Geoff Huegill, left, and Bill Kirby are encouraging Thai children to learn to swim while also trying to improve the standard of coaching.

Huegill and fellow Olympic medallist and compatriot Bill Kirby were in Thailand last week for a four-day series of clinics, held in Bangkok and Chaiyaphum, organised by the Australian Embassy in Bangkok, Sports Authority of Thailand and Thailand Swimming Association.

Huegill, whose mother is a Thai from Chaiyaphum, said before starting swimming seriously many Thais might be worried about their physique and afraid that they would be at a disadvantage against westerners.

"Actually, it is not that important. It depends on which event you are doing. Strength not only comes from your body but also your mind," Huegill said. "It is about passion. You have to know where you are now and where you want to go.

"I could give you social status or qualify of life," he said. "I was grown up in a family which did not have a lot of money. The sport gave me an opportunity to take my life from one level to another."

Kirby agreed saying that what swimmers learn can be applied to the business world in real life.

"You cannot learn this from the classroom. You learn about teamwork, leadership and other things they do not teach in university," he said. "What you learn in sports such as teamwork, leadership, respect and punctuality can be great to you in real life."

Huegill and Kirby enjoyed their workshop in Chaiyaphum, where the participants were coaches for young athletes in the northeastern provinces and students from Beaumont Ruam Pattana School.

Established by Timothy Beaumont, an Australian philanthropist and founder of Beaumont Partnership Foundation, the school aims to provide education for under underprivileged children.

The children were also taught about safety because, according to statistics from Thailand's Bureau of Non-Communicable Diseases, drowning is a leading cause of death among under-15 children.

The fatality rate is much higher than from infectious and non-infectious diseases. Each year, nearly 1,500 children die from drowning, or about four children per day on average.

"It is great for me to teach the kids, giving them the drive or the motivation or the spark to lead their lives in a better direction," Huegill said. "They have opportunities to learn from what we have learned so they would not make the same mistakes we have made."

Thanavit Thosakul, secretary-general of the Thailand Swimming Association, said that there are about 200 swimming clubs in the country and about 60 coaches attended the workshop.

While Thanavit believes the participants gained knowledge from the visiting coaches, he admitted that the association needs the right and proper management to help young athletes.

"Clubs often have different ways of coaching and this lead to problems at the later stages in the athletes' careers," he said.

"We are trying to make them go in the same direction. That is why we invited the coaches to help us. We have many young talents but we have failed to teach them to bring out their potential."

Jonathan Kenna, deputy head of mission of the Australian Embassy, said that the project should help not only the association but also strengthen the ties between the two countries.

"It is an example of the friendly and close relationship between Australia and Thailand," he said.

Thai Uber Cup stars bow out to China in semis