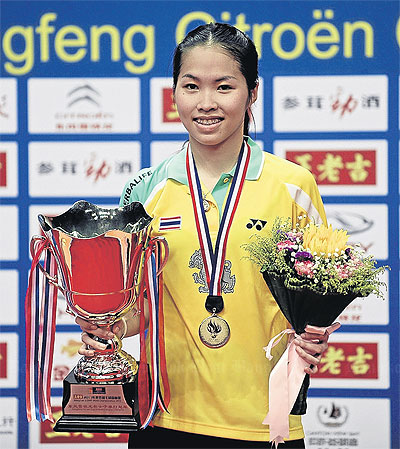 Ratchanok with the winner’s trophy in Guangzhou.

While Ratchanok had been a star before her victory against China's world No.1 and Olympic champion Li Xuerui in the women's singles final at the Guangzhou championships, Xie was forced into the spotlight after helping the 18-year-old become the youngest ever and Thailand's first world champion.

"Guiding her to win the world title was one of my goals as her coach," said the 47-year-old Chinese, who has been Ratchanok's coach since day one.

Indeed, he has been working at Ratchanok's club, Banthongyord Badminton School in Nakhon Pathom, since before Ratchanok was born.

Xie arrived at the school in 1992 through the Badminton Association of Thailand and with help from China. He has since helped created several fine players.

His first successful student from Banthongyord was Pattaphol Ngernsrisuk, who won at the Thailand Championships and is now a coach at the school.

Pisit Poodchalad, who won a gold medal at the 2010 Youth Olympics, is another star under Xie's wing.

However, his most notable student is Ratchanok, who was the youngest ever world junior champion at 14 in 2009 and the first player to have won the crown three times after two more victories in 2010 and 2011. 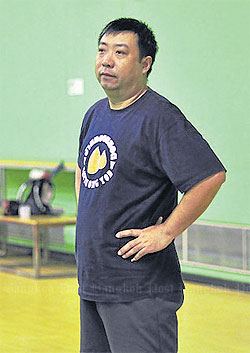 "At that time, Pattaphol was 12 and Pisit was a toddler while Ratchanok was not born yet."

"In China, their only goal is to be No.1 so it is very stressful for them," Xie said. "Here, we have different targets for players of different abilities."

Xie admitted he had been approached by many countries in Europe and Asia but said he was happy to stay here.

"We work like a family and I am very happy," he said.

With world No.2 Ratchanok off on Monday and Friday mornings, Xie often enjoys a round of golf at a nearby course.

His favourite course is Royal Gems Golf and Sports Club where he is a member. He is not only good at teaching badminton but his golfing skill is also not too bad.

"Now, I am a single-handicapper," he said.

Xie is sometimes assigned to travel with Ratchanok to tournaments, particularly those in his home country, such as the world championships in Guangzhou.

He said Ratchanok needed a proper schedule to stay fit for any tournament she takes part in.

Xie's next and ultimate target for Ratchanok is guiding her to win an Olympic gold medal _ which he said is much tougher than helping her win the world title.

"As world champion, she will be under more pressure. Her opponents will study her style seriously," he said. "She must improve and work harder because everyone wants to beat the world champion."

Kamala Thongkorn, owner of Banthongyord school, praised the coach for his contributions and creating a number of good players.

"It is difficult to find such a coach who works so hard. He is a great asset of our school," she said.

"I know he has received several offers but he loves to work here."

Xie also trains coaches so they can teach students the same way.

There were only about 10 students when Xie arrived but now there are about 300 at the school.

"We have about 20 young players who look capable of following in Ratchanok's footsteps," Kamala said. "Among them is Ratchapol, Ratchanok's eight-year-old brother. He has won all titles in his age group and Xie is looking after him." 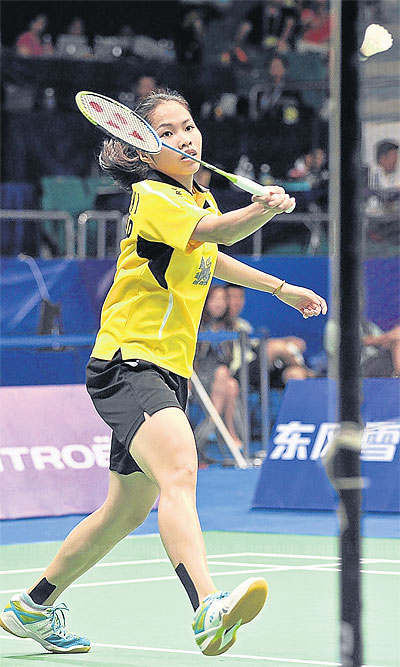 Ratchanok at the world championships in Guangzhou. 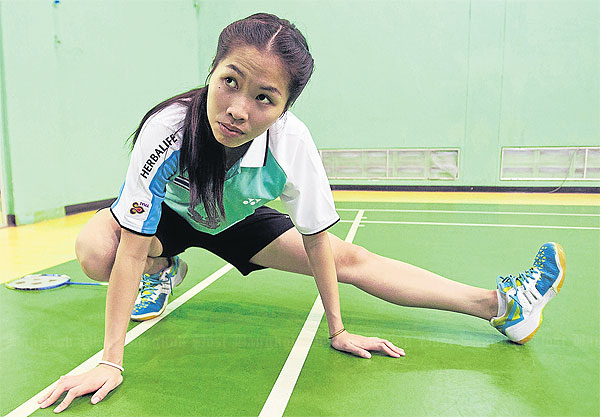