It's one of the world's smallest and wealthiest countries, but a deep gambling culture coupled with sheer entrepreneurial zeal has made Singapore a big player in global match-fixing, experts say. 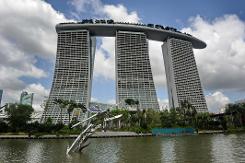 The Marina Bay Sands hotel resort in Singapore -- one of the world's smallest and wealthiest countries, with a deep gambling culture -- pictured on January 18, 2013

The arrests of two Singaporean men over a scandal in Britain has again thrown a spotlight on the Southeast Asian city-state, known for its cleanliness, strict law and order and high number of millionaires.

Despite such advantages, Singapore is continually linked to match-rigging around the world, testament to a network that is proving hard to eradicate -- even when leading members are under arrest or police protection.

Chann Sankaran, 33, and Krishna Sanjey Ganeshan, 43, were taken in by British police this month after a videotaped sting and accused of rigging lower-tier English games.

Singapore's Wilson Raj Perumal, a notorious fixer who was jailed in Finland and is now under police protection in Hungary, denied any involvement in the English scam after one of the suspects called him his "boss".

Reports said Perumal, who says he used to work with Dan Tan and has fixed games around the world, was also named by investigators probing a multi-million dollar fixing ring in Australian state football.

The latest developments are part of a chain of events set in motion more than 20 years ago, when Perumal started fixing games in Singapore before moving abroad to escape the attentions of Singaporean police.

"These Singaporean criminals recognised that there was money to be made in match-fixing at the low levels, and later translated this national skill, if I could say that, to the global platform," said Chris Eaton, director of the Doha-based International Centre for Sport Security.

Eaton, a former Interpol officer and ex-head of security at football's world body FIFA, calls Singapore the "epicentre of gambling in Southeast Asia".

Easy international transport, a passport accepted around the world and fluency in English and Mandarin have helped Singaporean fixers spread their influence abroad with the support of external investors, most believed to be from China.

'Burying our heads in the sand'

According to writer Neil Humphreys, author of the football-based novel, "Match Fixer", Singapore's fixation with gambling makes game-rigging hard, if not impossible, to bring under control.

The island off the southern tip of peninsular Malaysia has a popular horse-racing track and its two casinos are among the hottest in the world, raking in a combined total of $5.85 billion in 2012.

Gambling is so entrenched that to keep them away from the casinos, the government has levied an $80 charge on Singapore nationals just to get through the doors.

When there is a road accident, locals take note of the stricken cars' licence plates to use them in a four-digit lottery, thinking the numbers have now used up all their bad luck and will bring good fortune to the punter.

"No more burying our heads in the sand, Singapore is a nation addicted to gambling, as is much of the region," said writer Neil Humphreys, author of the football novel "Match Fixer".

"I no longer tell people that I have written a book on match-fixing or that I regularly write about football," he added.

"When I did in the past, the initial response was -- without fail -- to ask for betting tips on upcoming games. That response is uniquely Singaporean."

"Authorities are doing more than ever before when it comes to match-fixing, particularly in Singapore, but the sad reality is... not enough people care," he said.

"Match-fixing is just not a national issue that particularly registers with the average Singaporean. It barely registers at all."

International police agency Interpol said a "united and global" effort was needed to fight a crime which cuts across borders and jurisdictions.

"Each time arrests in connection with match-fixing are made anywhere in the world it makes headline news, but this is probably because they are still too rare an occurrence," a spokeswoman told AFP.

Investigative journalist Declan Hill, author of "The Fix: Soccer and Organized Crime", said it was a problem that Dan Tan and three associates had been arrested under a law that allows for indefinite detention without trial.

"The sad truth is that Singaporean authorities have to man up and do the decent thing: arrest the criminals, put them on public trial -- with all the embarrassment that will cause -- and stop the fixing," he told AFP.

No charges have been filed against businessman Dan Tan, full name Tan Seet Eng, and Singapore police declined to comment on the recent arrests in Britain.

"I don't see how government regulation and syndicate busts can change a culture where sporting events, festive occasions, family gatherings are often built around the betting shop, a pack of cards or a mahjong table," added Humphreys.

"This is a culture that goes back centuries. Arresting a few match-fixers won't change anything."

Barcelona crash out of Champions League

Eersel strolls to victory over Murtazaev