The club of star Japanese pitcher Masahiro Tanaka has approved his move to the US major leagues, at a likely bargain price for such a high-profile trans-Pacific deal because of a new "posting" system. 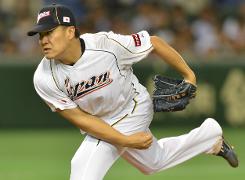 Japan's pitcher Masahiro Tanaka throws the ball against the Netherlands during the fifth inning of the second-round Pool 1 game in the World Baseball Classic tournament at Tokyo Dome on March 12, 2013

The Rakuten Eagles, powered by Tanaka to their first-ever "Japan Series" national title this year, spent about a week after the launch of the new system before announcing on Wednesday they would release the 25-year-old right hander.

The new rules put a $20 million cap on the money a Japanese team can earn from posting a player for a transfer to a major league club. There was no limit under the previous system.

"There are many problems in the new posting system. And the club, which owns a precious player, feels it is unequal," Rakuten president Yozo Tachibana told a news conference, without disclosing the release fee the club wants.

"But we have highly appreciated pitcher Tanaka's seven-year contribution to the team ... and accepted his wish to challenge the major leagues."

Tanaka separately told reporters: "I want to continue my baseball career by firmly bearing in mind what I have achieved (at Rakuten)."

If posted, Tanaka, who went 24-0 in the regular season this year, is expected to draw several suitors including the New York Yankees and the Texas Rangers.

The original system was introduced in 1998 to prevent a drain of Japanese talent across the Pacific without benefiting their old clubs and to provide US teams with equal bidding opportunities.

But rising bidding prices have prompted MLB to revamp it.

Under the previous system, which helped Japanese stars Yu Darvish, Daisuke Matsuzaka and Ichiro Suzuki land MLB deals, US clubs made blind offers for negotiation rights to a player. The highest bidder would win the rights.

Under the new system, a posted player can negotiate with any club willing to pay a release fee which his NPB outfit demands. But the amount should not exceed $20 milllion.

In 2012 the Texas Rangers posted a record winning bid of $51.7 million just for the right to negotiate with right-handed pitcher Darvish.

Tanaka's transfer could have earned the nine-year-old Rakuten, the youngest of Japan's 12 professional baseball clubs, at least $50 million under the old system, according to Japanese media.

Rakuten president Tachibana earlier told Japanese media that the new rules would resemble a "free-agent system" and force clubs to do a "bargain sale."

The US had its deadliest day ever, with Covid-19 fatalities topping 2,700, according to Johns Hopkins University. Hospitalisations in the country surpassed 100,000 for the first time.

SHANGHAI - Next season's Chinese Super League will take on a new look after the 16 teams were told to drop the corporate part of their names, infuriating some fans.

Neymar puts Man Utd to the sword as Dortmund advance

Australian Open in February, players to train in quarantine