Muang Thong suffer setbacks ahead of new season, which kicks off today 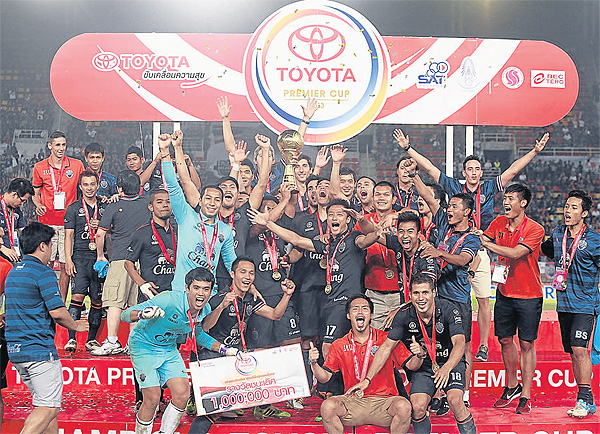 There are 20 teams in the league this season, two more than the previous campaign thanks to a legal struggle between Si Sa Ket and Isan United for the right to play in the top flight.

A court ruled in favour of Si Sa Ket late last season when the club had only played three matches. The Football Association of Thailand (FAT) then decided to allow Si Sa Ket to stay up in the top flight and make it a 20-team competition for this season.

Despite having more teams, the championship is again expected to be a two-horse race between Buriram and Muang Thong.

They have the biggest fan bases and financial power _ Buriram are owned by Newin Chidchob, arguably the most influential person in his home province of Buri Ram, while Muang Thong are run by Siam Sport Syndicate and sponsored by SCG, one of the country's biggest companies.

Buriram swept all three domestic titles _ the TPL, FA Cup and League Cup _ last season, and Newin has made it clear he wants to repeat the feat this year.

``We want to win every [domestic] trophy,'' said Newin, who declared he is `head of the head coach' at Buriram after he sacked coach Atthapol Pusapakom last year. 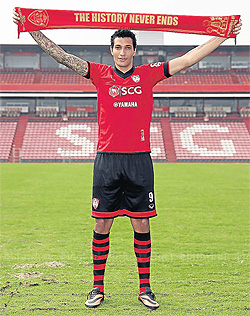 He also aims for his team to advance to the semi-finals of the AFC Champions League, having reached the quarter-finals last year.

Former Arsenal and Hull City forward Simpson has been in good form with the Thai champions, scoring the winner in Buriram's 1-0 win over Muang Thong in the King's Trophy charity match this month.

He was also on target in Buriram's 1-1 draw in the Toyota Premier Cup match against Japan's Nagoya Grampus Eight last week as Buriram went on to win on penalties in the annual match between the Thai League Cup winners and a Japanese team.

Simpson is now Buriram's No.1 striker and will play in the AFC Champions League at the expense of the Philippines international Javier Patino.

Muang Thong have vowed to make a strong comeback but their prospect does not look so bright judging from their pre-season results.

They lost to Buriram in the King's Trophy match and were eliminated in the AFC Champions League qualifying round following a 2-1 defeat at Melbourne Victory last week.

The Kirins have brought in several Thai and foreign players including former England striker Jay Bothroyd.

However, Thailand forward Teerasil Dangda will join Spanish side Almeria in mid-year for a season-long loan spell.

Muang Thong also have a new coach in Scott Cooper, who had a brief spell at Buriram last season.

However, Cooper's reign at Muang Thong could soon end as there have been rumours for weeks that Kirins bosses are not happy with his performance.

While Muang Thong have been eliminated in the AFC Champions League, the setback may be a boon in disguise as they can focus solely on their domestic battle.

Over the years, Chonburi have been seen as a third contender for the TPL title, they won once in 2007. But the Sharks have rarely come close to challenging Buriram or Muang Thong.

Chonburi, one of Thailand's best organised club, have a new coach in Japanese Masahiro Wada, who replaces Witthaya Laohakul.

But Chonburi crashed out of the AFC Champions League qualifying round last week with a 4-0 defeat at Beijing Guoan in the Sharks' first competitive match under Wada.

Chonburi's strike force is led by Brazilian Thiago Cunha but the Sharks are a `Dad's Army' as they have several veterans, including 38-year-old forward Pipop On-mo and 43-year-old midfielder Therdsak Chaiman, who is affectionately called `Uncle Therd' for the obvious reason.

With Buriram and Muang Thong standing in their way, Chonburi, along with BEC Tero Sasana and Bangkok Glass, are seen as contenders for top-five finishes.

The TPL also has a new boss in Ong-arj Kosinkha, former FAT secretary-general who succeeds Vichit Yamboonruang as TPL chairman.

Shortly after his appointment, Ong-arj was in the headlines for the wrong reason. He issued a regulation banning fans to hold banners attacking the FAT and TPL as well as their officials at stadiums and clubs with such fans would be fined or suspended.

Following heavy criticism, Ong-arj has since made a u-turn and shelved the plan.

Ong-arj will have a lot of work to do as TPL chief with of the most difficult tasks being making sure that officiating is fair and straightforward.

There have been complaints about biased refereeing and rumours about referees taking bribes. Several match officials were shot last year but FAT and TPL bosses insisted they had nothing to do with alleged match-fixing.

FAT and TPL officials have warned wayward referees that they will face severe punishment now that the professional sports law has been in place.