Biarritz close in on drop as Oyonnax get win boost
Sports

Biarritz close in on drop as Oyonnax get win boost

Biarritz's imminent relegation from the French Top 14 moved a step closer Friday as Oyonnax boosted their own survival hopes with a 24-22 win in the Basque Country. 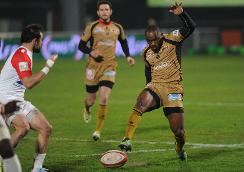 Oyonnax's center Silvere Tian (R) kicks the ball during the French Top 14 rugby Union match Biarritz vs Oyonnax on March14, 2014 at the Aguilera Stadium in Biarritz

Biarritz, French champions as recently as 2006 and European Cup finalists in 2010, knew before kick off that even if they won every one of their remaining games with an attacking bonus point, they would probably still go down.

As it was, they lost to the team directly above them and who hadn't won an away match all season before visiting the Aguilera.

The result, which offered Biarritz a losing bonus point, means they are now 19 points from safety with five games left, meaning they could be relegated as early as next week.

Argentine fly-half Benjamin Urdapilleta was the hero for Oyonnax scoring 19 points, including the opening try on five minutes and the winning penalty two minutes from time.

Pierre Aguillon scored their other points with a try.

More importantly, though, when they moved in front with less than four minutes remaining, Biarritz failed to maintain their discipline and immediately gave away a penalty, giving Urdapilleta the chance to win it for Oyonnax, who now trail Perpignan in the last position of safety by just three points, but with a game in hand.