Leg-spinner Imran Tahir came to South Africa's rescue as they survived a scare from the Netherlands with a hard-fought six run win in their group one match in Chittagong on Thursday. 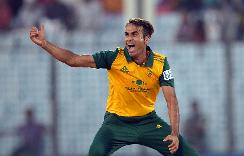 Tahir took 4-21 in his four beguiling overs to keep the Netherlands down to 139 in 18.4 overs in a chase for 146 in the super-10 stage match at Zahur Ahmed Chowdhury stadium.

Tahir's effort overshadowed paceman Ahsan Malik's best bowling figures of 5-19 by a Dutchman in all T20 internationals which restricted South Africa to 145-9 in their 20 overs.

The Netherlands, who were shot out for 39 -- the lowest-ever Twenty20 score -- against Sri Lanka in their previous match, had themselves to blame for not able to chase the modest target despite a fiery start of 58 in 5.5 overs given by Stephan Myburgh's 28-ball 51.

Myburgh, born in South Africa, was particularly severe on paceman Lonwabo Tsotsobe who he smashed for four boundaries and two sixes in the third and fifth overs.

Myburgh, who hit a match-winning 63 in a remarkable win over Ireland which helped his team to qualify from the first round, reached his half-century off just 25 balls with eight boundaries and two sixes but a run later was bowled by spinner Jean-Paul Duminy.

But none of the other batsmen could cope with Tahir as the Netherlands lost their last seven wickets for a mere 42 runs.

South Africa's skipper wasn't happy with their performance despite the win.

"I think we are making it hard for ourselves," said Du Plessis. "It's a great sign when your side is not playing 100 percent and still gets over the line."

"We obviously let this one go. We played across the line to Tahir," said Borren of the man-of-the-match leg-spinner. "I am miffed with the fact that we didn't get over the line."

Earlier Malik wrecked a formidable South African batting line up which couldn't get going after they were put into bat.

The 24-year-old bettered the previous best T20 bowling feat by a Dutch bowler of 4-19 achieved by teammate Pieter Seelaar against Kenya in Abu Dhabi four years ago.

South Africa lost opener Quinton de Kock in the first over for nought and couldn't get the kick start they needed.

Hashim Amla, who hit seven boundaries and a six off 22 balls, top-scored with 43 and tried to lift the tempo but regular wickets kept the South Africans in check.

Amla hit four boundaries and a six off one Michael Swart over but Malik removed him in his first over and then dismissed the dangerous Albie Morkel (five) in his second.

He also took Dale Steyn (five), Beuran Hendricks (three) and David Miller (17) to improve on his previous best figures of 3-16, in the tournament.

Even AB de Villiers (21), skipper Faf du Plessis (24) and Duminy (12) failed to score big as they fell to miscued shots.

South Africa left out paceman Morne Morkel to bring Hendricks into the side which beat New Zealand by two runs on Monday.

Sri Lanka play England in the next game later Thursday.

The top two teams from each group will qualify for the semi-finals to be played in Dhaka on April 3 and 4. The final will be played on April 6.