Lille ground out yet another 1-0 win on Saturday, beating local rivals Valenciennes thanks to a second-half Divock Origi goal to close in on Champions League qualification from Ligue 1. 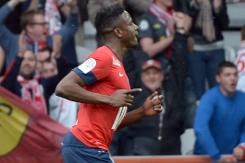 Lille's forward Divock Origi celebrates after scoring a goal during a French L1 football match against Valenciennes on April 12, 2014 at the Grand Stade in Villeneuve-d'Ascq, outside Lille, northern France

It was a ninth 1-0 victory this season for the northern club and it consolidated them in third place in the Ligue 1 table, eight points clear of fourth-placed Saint-Etienne, who go to Reims on Sunday.

Indeed, Rene Girard's side are also now just three points adrift of Monaco in second before the principality club travel to Rennes later.

Only the top two teams go straight into the Champions League group stages, with the third-placed side having to go through two qualifying round ties to get there.

Salomon Kalou hit the post in the first half for LOSC before Valenciennes goalkeeper Magno Novaes produced a superb flying stop to keep out a Djibril Sidibe shot just after the restart.

The only goal of the game at the Stade Pierre-Mauroy came 20 minutes from time when Kalou set up Belgian forward Origi, whose shot was deflected into the net off Valenciennes defender Carl Medjani.

The visitors were furious at not being awarded a foul when Simon Kjaer caught Tongo Hamed Doumbia at the other end in the build-up, and they remain eight points adrift of safety with time running out to avoid relegation.

Lille will now be hoping for Monaco to lose later, although Girard insists catching Claudio Ranieri's big-spending side is not at the forefront of his mind.

"It is not our objective but if they slip up we will be there. The important thing is to worry about ourselves and to keep going," said Girard, whose team have a difficult run of fixtures to finish the season, including a trip to Marseille next week and a home meeting with Paris Saint-Germain next month.

"The end of the season will be tough, but it was good to win tonight to keep us in the running."

PSG will also be looking for Monaco to slip up in Brittany, because if they lose and Paris win at Lyon on Sunday, the capital side will be crowned champions with five matches of the season remaining.

Marseille won 3-2 at Montpellier on Friday night under the watchful eye of Marcelo Bielsa, the former Argentina coach who is being tipped to take over from interim coach Jose Anigo at the Stade Velodrome.

Dimitri Payet scored a late winner for OM to keep them in contention for a place in Europe next season.