Monaco's 1-0 win at Rennes on Saturday means Paris Saint-Germain will have to wait a little longer before securing a second straight Ligue 1 title. 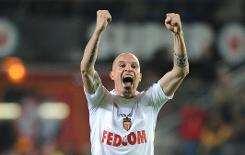 A Monaco defeat in Brittany would have left PSG in a position to secure the championship on Sunday with a win at Lyon, where they won the title last year, but a solitary strike by Emmanuel Riviere early in the second half gave the principality club the points.

Monaco are now 10 points adrift of PSG with five matches remaining, although they are more interested in keeping Lille in third at arm's length.

Lille won 1-0 at home to local rivals Valenciennes earlier thanks to a second-half Divock Origi goal, a result that put them eight points clear of fourth-placed Saint-Etienne, who go to Reims on Sunday.

Only the top two teams go straight into next season's Champions League group stage, with the third-placed side having to go through two qualifying rounds to get there and fourth having to settle for the Europa League.

The Croatian was replaced in the starting line-up by Argentine international Sergio Romero, who kept a clean sheet on his Ligue 1 debut.

Only a great save by Benoit Costil at the other end prevented Layvin Kurzawa from giving Monaco the lead in the first half, but the only goal arrived 10 minutes into the second half, Jeremy Toulalan setting up Riviere to score his 10th league goal of the campaign.

Monaco now turn their attentions to Wednesday's French Cup semi-final against Guingamp, and they could end up meeting Rennes again in the final, with Philippe Montanier's side facing Angers in the other semi.

"We have worked hard all season but the most important moment is now," said Ranieri. "We did well in the second half with the goal and with two or three other chances."

The Italian also claimed he is not feeling the pressure heading into the semi-final despite speculation that he could be sacked in the summer.

"I have lived with pressure since I was born. I want to get the best out of myself. I don't feel that I have to win the Cup and finish second just to keep my job."

In Lille, the only goal of the game came for the hosts 20 minutes from time when Salomon Kalou set up Belgian forward Origi, whose shot was deflected into the net off Valenciennes defender Carl Medjani.

The visitors were furious at not being awarded a foul when Simon Kjaer caught Tongo Hamed Doumbia at the other end in the build-up, and they are six points adrift of safety with time running out to avoid relegation.

After what was their ninth 1-0 win this season, Lille coach Rene Girard insisted catching big-spending Monaco is not in his thoughts.

"It is not our objective but if they slip up we will be there. The important thing is to worry about ourselves and to keep going," said Girard, whose team have a difficult run of fixtures to finish the season, including a trip to Marseille and a home meeting with PSG.

"The end of the season will be tough, but it was good to win tonight to keep us in the running."

Elsewhere, Ajaccio came from behind to draw 1-1 against Bordeaux, with Mehdi Mostefa's late equaliser earning them a draw that postpones their inevitable relegation back to the second tier. However, they will be down if Guingamp claim a point at Nantes on Sunday.

Sochaux kept their survival hopes alive with a 2-0 win against Toulouse, but Evian stay well clear of the drop zone after a 2-1 win against Bastia, while Vincent Aboubakar scored in injury time to give Lorient a 2-1 win at Nice.

Dimitri Payet's late goal handed Marseille a 3-2 win at Montpellier on Friday under the watchful eye of Marcelo Bielsa, the former Argentina coach who is being tipped to take over from interim coach Jose Anigo at the Stade Velodrome.