World number one Rafael Nadal maintained his quest for a ninth Barcelona Open title with a comfortable 6-3, 6-3 over Ivan Dodig on Thursday, racking up his 42nd win in 43 matches at the tournament. 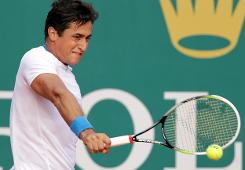 The 13-time Grand Slam champion has been far from happy with his form in recent weeks, but after a slow start had far too much for the world number 37 as he broke four times in total before sealing victory in an hour and 23 minutes.

Nadal was happier with his performance against Dodig than in his second round outing against journeyman Albert Ramos on Wednesday.

"I think from yesterday it is a step forward. I had a bit more intensity in my legs today and I can go away from the court a bit calmer," he told Spanish TV station Teledeporte.

"In the second set I began to play pretty well, so I am happy to win because Dodig is always a difficult opponent. I felt pretty good throughout the match and now I have to prepare for another difficult game tomorrow."

Nadal first broke the Dodig serve in the fifth game, but the Croatian immediately broke back to level at 3-3.

However, the Spaniard then began to find his rhythm to roll off three straight games to close out the set.

More was to follow in the second set as a series of penetrating ground stokes from Nadal forced Dodig onto the back foot in the fourth game to secure the break before serving out the match without any difficulties.

Nadal's only loss in Barcelona came on his debut as a 15-year-old in 2003 when he was beaten by compatriot Alex Corretja in three sets in the second round.

His winning streak is now at 41 in a row, with Nadal losing just three sets in that spell.

Victory also took Nadal level with Arthur Ashe on 683 career wins with Boris Becker's mark of 713 now in his sights.

Next up for Nadal in Barcelona is a meeting with fellow Spaniard Nicolas Almagro as the world number 20 overcame compatriot Fernando Verdasco 6-3, 6-3 to avenge his defeat in the Houston final just 11 days ago.

Just one break in the eighth game was enough for Almagro to take the first set.

Both men broke towards the start of the second set, but again Almagro made his move again towards the end of the set as he broke once more to seal victory.

Cilic will face Japanese fourth seed Kei Nishikori in the quarters as he eased to a 6-0, 6-4 victory over Kazakhstan’s Andrey Golubev.

Nishikori is making his first appearance of the season on clay in the Catalan capital and after struggling past Roberto Bautista Agut in three sets on Tuesday, he seemed more at ease as he equalled his best-ever run in Barcelona by reaching the last eight.

The Latvian will face Russia's Teimuraz Gabashvili in the last eight after he continued his fine week after shocking second seed David Ferrer on Wednesday with a 6-4, 6-2 win over Inigo Cervantes.