The Maracana stadium, a footballing theatre which every fan dreams of visiting, has morphed into an ultra-modern, sustainable and safe arena, albeit one with elitist traits, compared to the populist temple it once was. 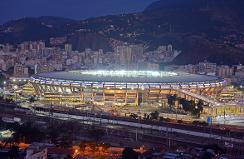 Rio de Janeiro's Maracana stadium as seen from the Mangueira favela on June 29, 2013

Though the stadium has twice been extensively remodeled since, all Brazilians know it as the place where a nation's dreams died on July 16, 1950, when Uruguay wrecked the party, a 2-1 win giving them in that year's World Cup trophy match.

Alcides Ghiggia's 79th-minute winner ensured Brazil, the overwhelming favorites, were undone in their own gigantic bowl of a stadium.

Even a record five titles since have not entirely dulled the shock of a defeat, dubbed "Maracanazo", which still looms 64 years later.

But Luiz Felipe Scolari's generation now have the chance to wipe away the historic stain -- though they will only get to play at the stadium should they reach this year's final.

"When you think of football you think of the Maracana. It is a mecca -- everyone wants to visit at least once," Marcos Guterman, author of "Football Explains Brazil", told AFP.

The Maracana -- also known as the Mario Filho stadium after the journalist who campaigned for its construction -- has been the scene of stirring exploits by Brazil's legendary stars.

The name comes from the Rio district of the same name and derives from the Tupi Indian word maraka'na, meaning Guacamaya, Brazil's colorfully-plumed macaw.

Chief among them was the incomparable Pele, who scored his 1,000th career goal at the stadium on November 19, 1969 from the penalty spot before an adoring crowd.

The stadium is not just a shrine to football, with music artists such as Frank Sinatra, Paul McCartney, Tina Turner and rock band Kiss all filling the venue.

Construction began in 1948, a year after FIFA confirmed the country as the first post-World War II hosts.

As with this year's event, there were delays -- the Maracana was only inaugurated on June 17, 1950, a mere week before the tournament started.

The designers stuck to their blueprint, but by the time the tournament started they had not quite finished.

"The waste of cement, money and time was justified," wrote Teixeira Heizer in his book "Maracanazo".

"The Maracana had to be imposing -- but also sufficiently solid to support more than 200,000 people jumping up and down."

It is estimated that staging the 1950 World Cup cost Brazil some 400 million reais ($173 million at today's exchange rate).

The Maracana was the target of criticism amid an estimated bill of $13m, but the city authorities and campaigners, led by Filho, won the argument.

Wide-ranging reforms were carried out in 1999 ahead of the FIFA World Club Cup with capacity reduced to 100,000.

Prior to the 2007 Pan American Games the seatless general admission, which had been free to enter after half-time, was closed off.

Ahead of this year's World Cup the Maracana had to close its doors for two-and-a-half years for a $600 million facelift not to everybody's liking and taking capacity down to 73,531.

"I am not going to get all nostalgic and think it should stay as it is," says Guterman.

"It is still a church, albeit now a reformed church."

Compared with the 1950 vintage, Brazil can at least point to happy memories of the remodeled venue, having last year seen off world champions Spain to win the Confederations Cup.

But watching games these days at the stadium does not come cheap, with even cheap seats for a Flamengo-Fluminense league derby costing $45 this year.

Fluminense recently cut entry prices as low as $4.50 and were rewarded with crowds rising to a degree after some league games were played out before paltry attendances.

After all the expense, Brazil now must exorcise 1950 by ensuring that this year neither Uruguay, nor anyone else, rain on their parade.