Marseille's ambitions of securing European football next season took a knock on Friday after the south coast club were held to a 1-1 draw at Nantes. 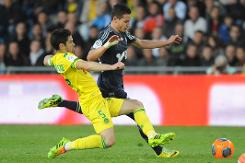 The stalemate left Jose Anigo's side in sixth place, two points adrift of Europa League-bound Lyon, who travel to the Stade Velodrome next weekend.

Midfielder Florian Thauvin, who arrived at Marseille on a 15 million euro move from Lille at the start of this season, put the sleeping French giants into the lead after half an hour with a shot from 20 metres.

Senegal international Issa Cissokho levelled for Nantes with 25 minutes left for his fourth goal in the last three games.

Marseille are set to come under new management next season, with Anigo making way for former Chile and Athletic Bilbao coach Marcelo Bielsa.

On Saturday, Paris Saint-Germain can be crowned champions without kicking a ball.

Laurent Blanc's defending titleholders, 10 points clear at the top, will win the championship if second-placed Monaco lose to relegated Ajaccio.

PSG have a second chance of wrapping up their second successive title in the lunchtime kick-off at Sochaux on Sunday.