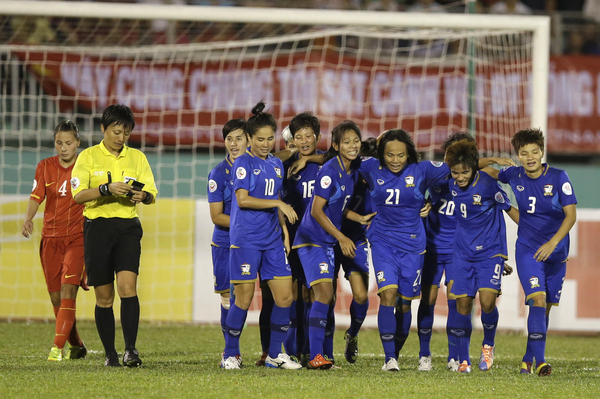 Coach Nuengrutai Srathongvian's team became the first Thai side, men or women, to qualify for the World Cup at the senior level. Thailand has played in a couple of World Cup finals at the junior level.

"We have achieved our World Cup dream," said Nuengrutai whose team also beat Vietnam by the same scoreline in the SEA Games final last year.

The top five teams at the Women's Asian Cup qualify for the 2015 Women's World Cup in Canada.

The quartet progressed to the Women's World Cup as semi-finalists at the Women's Asian Cup.

The Thais dominated the first half but Vietnam goalkeeper Dang Thi Kieu Trinh denied them with two fine saves.

After a goal-less first half, Thailand went ahead on 48 minutes following a slip by a Vietnamese defender which allowed striker Kanjana to calmly slot home.

It galvanised the visitors who were outclassed in their first two group games in Ho Chi Minh City.

On 65 minutes a dangerous cross-shot from Kanjana was judged to have been parried over the line by the home side's goalkeeper sparking delirium among the Thai players and bench.

But Vietnam threatened a late fightback with a long-range shot on 85 minutes by Tuyet Dong.

It sparked a late and ultimately fruitless surge on the Thai goal as Vietnam finished the tournament in sixth place.

In the group stage, Thailand lost 7-0 to China, were defeated 4-0 by South Korea and beat Myanmar 2-1.

Worawi Makudi, president of the Football Association of Thailand, has promised to give the team in the region of 10 million baht if they reach the 2015 Women's World Cup finals from June 6-July 5.

The team will also get another five million baht from their manager Nuanphan Lamsam.

Meanwhile, Kasem Jariyawatwong, manager of the Thai men's team for the Asian Games, has vowed to give the squad 10 million baht if they win gold in Incheon, South Korea later this year.