The heroines of Thai football

The national football team’s recent 2-1 victory over Vietnam in the 2014 AFC Women’s Asian Cup earned them the final qualification place in next year’s World Cup. To celebrate, Muse talks to team manager Nualphan Lamsam and lead player Kanjana Sungngoen about the historic success of the country’s female footballers 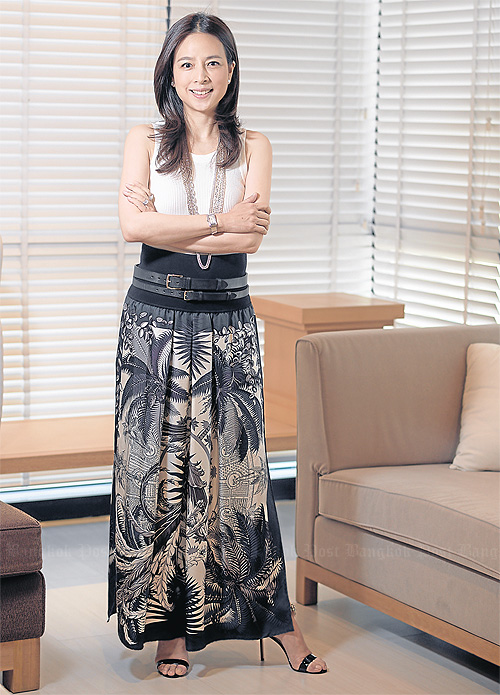 In a recent meeting with the famously attractive manager, who is also the president and CEO of Muang Thai Insurance, I had to ask. And she humbly replied: "Beauty secret? I am almost 50 years old now!" She did share a few tips that she believes stop her from ageing though — drinking plenty of water, saying no to alcohol and exercising regularly.

Many would be surprised, however, that despite being the manager of the national football team, her preferred form of exercise is simply walking on the treadmill for 30 minutes every day.

"I don't play sports that much, and certainly not football," said the softly-spoken executive.

Besides her seemingly timeless beauty. Nualphan is a well-known socialite for many other reasons. She runs the family-owned insurance company, manages the company that distributes leading luxury fashion labels in Thailand, is involved in numerous social projects, and — as we've seen on the front page of most newspapers recently — serves as the manager of the current national women's football team, which, for the first time in history, managed to qualify for the 2015 FIFA Women's World Cup in Canada.

Although not a football player herself, she has had experience in sports team management. She was appointed the manager of the Thai team in the Far East and South Pacific Games for the Disabled (Fespic Games). Six years ago, she was approached by the then-president of the Football Association of Thailand (FAT) Worawi Makudi to manage the women's football team. Under Nualphan's management, the team began to flourish and win major prizes, including the recent 27th SEA Games football gold medal last year and the victory over the Vietnamese team which gained them the last berth in next year's World Cup. In short, the team is experiencing its best run of form ever.

The first significant moment in Nualphan's career as team manager was when the Thai team lost to Vietnam at the 2009 SEA Games tournament in Vientiane, Laos, in a penalty shoot-out.

"We were so heartbroken that time. We all cried together, but through that experience I learned that it's only natural that there will always be winners and losers in sports," she said.

This year is also the first time the team has ever used a female coach — Nuengruethai Sathongwien — and the team continues to get better and better. Nualphan believes that as the players are becoming more talented, watching women's football has become as exciting and popular as the men's tournament.

"Women's football is much more popular among audiences today. Big matches are televised live and the viewership is as large as the men's matches. I suppose that's one of the inspirations for our team, knowing that there are many Thai people watching and supporting us. When we played the final match in the recent SEA Games, I told my team that although the stadium was packed with the opponent's fans, there were as many, if not more, Thai supporters cheering us on at home," said Nualphan.

She still recalls that match like it was yesterday. Thailand scored two goals first, but towards the end of the game, the Vietnamese team managed to pull one back.

“It was so heart-wrenchingly exciting that I spent the last few minutes praying and begging the divine beings," said Nualphan with a light laugh. "Now I have to go make merit to thank them for their help." Nualphan is evidently proud of her team as she speaks. Despite their physical disadvantages — Thai women's comparatively small frames — their strong harmony makes them almost invincible, Nualphan believes.

"The team is very strong because we are like a close-knit family. We share our joys and sorrows. Individually, each of them might have her own strengths and weaknesses, but they sync together incredibly well. Their teamwork is really top-notch," said Nualphan.

Much of this Nualphan puts down to the team’s morale-boosting pre-match ritual that fuels them so intensely. Before every game, the team sings Sadudee Maharaja (Praising The Great King) to remind them that they are not only playing for the team, but for the whole country and His Majesty.

"Beyond wanting to win and succeed, our team wants to achieve something for our country, to bring pride to the people of Thailand. Sport is never just about one's self. We want to make Thai people happy," Nualphan said.

Nualphan is happy to see that women's sports are becoming stronger and more popular in Thailand. From volleyball and badminton to football, Thai women are increasingly recognised for their sporting talents.

"Women can do so many great things, and I am proud to be a part of this achievement that brings joy to Thailand. It is heartwarming to see how the fans welcomed our team when we came back, and how other sporting heroines are so praised by the public," she said.

Although it will be the first time a Thai team will play in a tournament as big as the Women's World Cup, Nualphan promises that Thailand will not be there just for "decoration".

"We may be new, but we are also experienced. The team will practice as much as possible. We will have a nutritionist to help them eat better, and a professional athlete to help them perform better. It will be a lot of work for us all, but we are ready to do this, to create another chapter in the history of Thai sport," she smiled confidently. 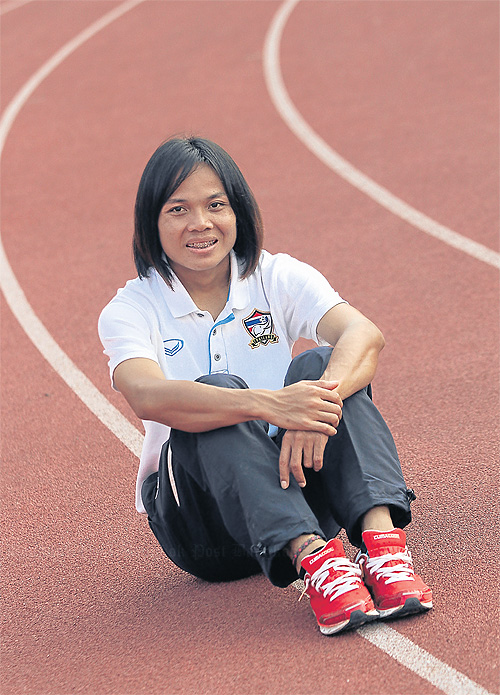 It was the 28-year-old footballer's two goals in the monumental 2-1 victory against Vietnam that earned the team the fifth and final place offered to Asian teams in the 2015 Women's World Cup.

"It was sheer madness, because we were playing on their turf," said Kanjana about the May 21 match in Vietnam. "Their fans were everywhere, and it was quite stressful. I suppose it must have been even more stressful for the Vietnamese team to carry such expectation from the fans."

An extra addition to that tremendous pressure, Kanjana said, was the fact that the Thai and Vietnamese teams have been major competitors for years, particularly since 2009, when the Thai team had their dream of winning the SEA Games gold medal snatched away by their old rivals on penalties in the final.

The Thai team did manage to win the SEA Games gold medal in Mandalay last year, however, which led many to expect a positive result at the AFC Women's Asian Cup 2014. Kanjana said that she and her teammates were both hopeful and intimidated at the same time.

"We just wanted to do our best, and secretly hoped that we would triumph, and we succeeded," said Kanjana, who always credits the victory to her team, and in fact hardly mentions that it was she who scored both goals.

Kanjana began playing football because she felt it was a challenging sport; one where her solid physique and athletic background was to later come in handy and also come under scrutiny. While many see football as a male-only sport, Kanjana never saw it that way.

"I just enjoyed playing it. I don't think sport has any gender. It made me happy, so I did it; simple as that," she said.

Life as a successful national football player is tough, but it is a sacrifice that Kanjana was, and still is, willing to make. She has left her family and friends in her hometown in Surin province to come to Bangkok and now dedicates all of her waking hours to getting fit and practising. As a teen, practising took up more than half of her school time, and so, she admits, it was quite a struggle to finally graduate.

Just how good is she? Well, Kanjana is so fast and so strong that after playing against her, the Japanese women's national football team accused her of being a man, and requested her to prove her gender, which she did.

Kanjana admits that as much as she loves football, there have been times where it has been so taxing and so stressful that she sometimes wondered if she should just call it a day.

Those two goals on May 21 were, in her own words, her biggest achievement and a source of huge pride for her family. The news about last month's victory brought tremendous joy to Thailand, at a time when the country was clouded with political tension. She is also proud that she has raised awareness about women's sport among the public.

"A lot of young girls have sent me Facebook messages saying that they admire me and they want to start playing football, too. I am very happy to have sparked an interest in football in young women because women can actually be really great at football, or any kind of sport.

"I can only play as long as my body allows me and in the future we will need new players to keep the team strong," said Kanjana.

There is no rest for the national football team, however, and they are currently about to get back into their strict routine, which involves at least four hours of daily practice on top of gym exercise and sticking to a controlled diet. The 2014 Incheon Asian Games this September is their next destination, and after that, they will get cracking in preparing for the World Cup in Canada in June.

"It's already beyond overwhelming to have the chance to participate in the World Cup. We will do our best without pressuring ourselves too hard. We're new to the tournament, but we will not take it easy," said Kanjana, with sheer determination in her eyes. 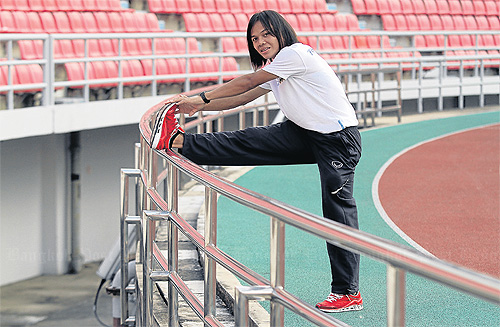 Kanjana Sungngoen was 16 years old when she first started playing football. Back then, however, never in her wildest dreams did she think she would be so instrumental in helping the women's national football team qualify for the World Cup for the first time in history.
Do you like the content of this article?
COMMENT
MOST RECENT
World