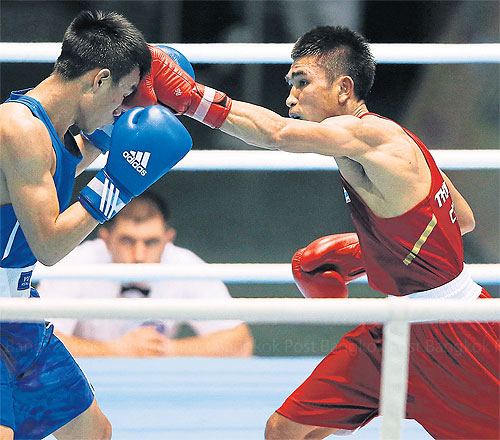 Chatchai Butdee, right, is one of Thailand’s best hopes in boxing.

The trio are among seven Thai men in Incheon and Somyot Julsen, deputy manager of the Thai boxing team, believes they are the squad’s best bets following yesterday’s draw.

Tanes Ongjunta (49kg), Apichet Saensit (69kg) and Wuttichai got a bye in the first round.

Donchai will face Mario Fernandez of the Philippines today. Although Donchai lost to the Filipino in the final at last year’s SEA Games, Somyot said he should be able to avenge the defeat.

He should have few problems against the Iranian but would face a formidable task against San Soon-Chul of South Korea or Han Sang-Ryong of North Korea in the next round.

In the women’s event, Somyot admitted that Thailand’s two female fighters, Sopida Satumrum (51kg) and Tassamalee Thongjan (60kg), had very tough assignments as they both meet Chinese boxers in their opening bouts.

There are 13 gold medals up for grabs in the boxing competition, comprising 10 weight divisions for men and three for women.

Thailand hope to win at least two gold medals, having claimed only one at the 2010 Asian Games.

Meanwhile, China and India dominated boxing four years ago in Guangzhou, but when a new-look competition begins today, fast-improving Kazakhstan could pack the biggest punch.

Gone from Incheon will be protective head gear after the Amateur International Boxing Association (Aiba) shook up the rules last year.

Gone also will be displaying the score at the end of each round to prevent boxers who have built up a lead from coasting home.

And almost certainly gone appear to be China’s hopes of more than one or two medals despite being the leading nation in Guangzhou with five titles — including all three in the inaugural women’s competition — while India had five finalists, taking two golds.

Kazakhstan swept up seven men’s titles out of 10 at last year’s Asian championships, and four of those winners will be aiming to add Asian Games gold medals.

Kazakhstan have the favourites for both the men’s heavyweight (91kg) and super-heavyweight titles (+91kg) in Anton Pinchuk and Ivan Dychko.

Dychko, in particular, looks on an unstoppable march towards gold, having taken the silver in Guangzhou four years ago.

Since then he tucked away an Olympic bronze medal in 2012 and last year both a world championships silver and an Asian championships gold.

Welterweight world and Asian champion Daniyar Yeleussinov is also a hot selection to defend his Asian Games title from four years ago.

And Kazakhstani compatriot Adilbek Niyazymbetov is ranked No.1 in the world at light heavyweight having won silver in the 2012 Olympics and last year’s world and Asian championships.

China look very lightweight by comparison with none of their five gold medallists from Guangzhou returning, including the outstanding flyweight Zou Shiming who turned professional after winning a second Olympic gold in London and is lining up a world title tilt next year.

By contrast their inexperienced 2014 squad appears to contain only two likely medal candidates.

India, too, look to be hard pushed to repeat their success of four years ago, especially as they will be without superstar and pin-up Vijender Singh who strolled to the middleweight title in Guangzhou.

Part-time model and actor Singh, whose bronze at the 2008 Olympics in Beijing caused boxing to take off in India, injured his hand on the way to Commonwealth games silver in Glasgow in July and withdrew last month.

It leaves India’s other Guangzhou gold medallist Vikas Krishan, who won the lightweight (60kg) title in 2010, to carry the country’s hopes. But he may find the big step up to middleweight (75kg) a difficult hurdle to overcome.

India’s boxing queen Mary Kom, who has inspired a Bollywood movie on her life, is looking to reproduce the form that won her an incredible five world titles in the 48kg category between 2002 and 2010.

She takes to the ring at flyweight (51kg) after only managing a disappointing bronze four years ago when a heavy favourite in the same weight class.

Hosts South Korea have big hopes that lightweight (60kg) San keep the some gold at home, having lost out 19-9 in the 2012 Olympic final to the legendary amateur Vasyl Lomachenko.

Ukraine’s Lomachenko turned professional after the London Games with an astonishing amateur record of 396 wins and one defeat and went on to win the World Boxing Organisation featherweight title in June, in just his third professional fight.

The Philippines are always looking for the next Manny Pacquiao and their sponsors are reported to have dangled the team a three million peso (US$67,000) reward for finding one and bringing back home a gold.

They are sending eight boxers, six men and two women, but lost their lone gold medallist from the 2010 Games, flyweight Rey Saludar, to a rotator cuff injury earlier this year and it seems unlikely they can match their three-medal haul of four years ago. bangkokpost/afp