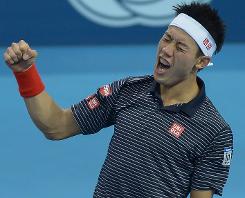 Kei Nishikori of Japan celebrates after beating France's Julien Benneteau in the men's singles final at the Malaysian Open on September 28, 2014

The top seed, the first Asian man to reach a Grand Slam singles final at the US Open this month, beat the fourth seeded Benneteau 7-6 (7/4), 6-4. He is now the first Asian to win the Malaysia tournament.

The showdown at a packed Putra Stadium in Kuala Lumpur got off to a cracking start.

Benneteau took an early hold of the tie to lead 3-1, but Nishikori showed resilience, powering back to draw level before going on to clinch the first set 7-6 (7/4), including two sublime back-hand volley winners at full stretch.

A single break in the second set proved enough for the world number eight to seal the match, boosting his chances of reaching the World Tour Finals in London in November.

The pupil of American tennis star-turned-coach Michael Chang said he did not have it easy against Benneteau, who finished as runner-up for the third consecutive year.

Benneteau has also now reached 10 tour finals without winning one.

"It was really tough. (Benneteau) was aggressive, but I was waiting for my opportunity, and when he got tired in the last game I took my chances and am happy it paid off," Nishikori said.

"It wasn't my best tennis, but I'm really happy to come away with the win in this tough game."

Nishikori said he was looking forward to playing in Japan after the strong support he received in Malaysia.

"It's really an honour to have won this tournament. It's not even in my country and so many people showed up," he said. "I want to do well in my next tournament in Japan after this."

He next plays in the Japan Open, which starts in Tokyo on Monday.