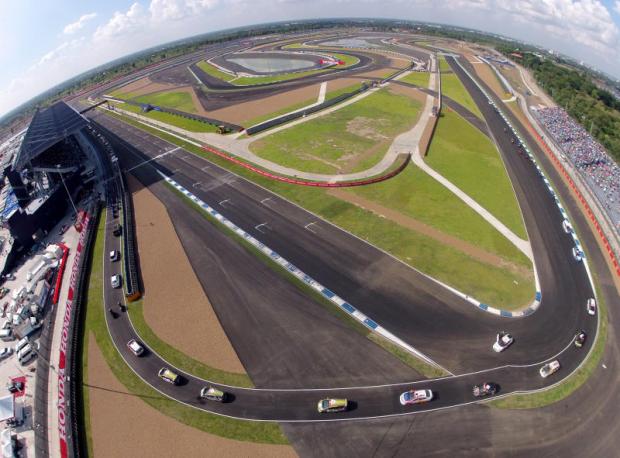 Locals said they hoped motorsports could revitalise the economy of the northeastern province as the Chang International Circuit (CIC) was unveiled to the international community.

"Today is the day that Thailand declares its potential and capability to provide the highest standard of racing circuit to the world," said Newin Chidchob, the former cabinet minister behind the project. "Today is history."

Motorsport and motorcycling governing bodies the FIA and FIM have certified the circuit in their highest grades. This means the two-billion-baht venue can hold the two organisations' top competitions, Formula One and MotoGP.

The circuit occupies 1,200 rai in Muang district and can accommodate a maximum of 50,000 spectators.

Mr Newin hatched the project to attract international motorsport events to Thailand and boost visitors to Buri Ram, as part of his plan to make the northeastern province one of the most popular tourist attractions in the country.

The track was christened with its first race Saturday — the Buriram United Super GT — which will draw to a close on Sunday.

Buriram Tourism and Hotels Society estimating a turn out of more than 70,000 domestic and international visitors over the weekend, expected to generate more than 200 million baht for the local economy.

The Bangkok Post Sunday surveyed six large hotels and was told the majority of hotel rooms in the city were fully booked from Thursday until Sunday.

The grandstands were almost full on Saturday, with large numbers of local people in attendance, despite the scorching heat.

"Buri Ram people feel like they have part ownership of the CIC, which will be a gathering place for local people from now on," said Buri Ram native Sanong Charoensiri, as he bought his entry ticket and souvenir T-shirt at the circuit.

"I've never been interested in motorsports before because it's so far removed from my reality. But now its in my home town, I want to be a part of the history."

Mr Newin was also the driving force behind Thailand's largest football stadium, which was completed in 2011 and stands alongside the CIC site. The Fifa-certified stadium is home to his Buriram Untied football club.

Mr Sanong said the price of land in the area has gone up since the stadium opened, benefiting local hotels and tourism. He believes the CIC will also bring a financial boost.

"We're pleased to have the circuit because it helps develop our home town," said Thammasuth Tongsuth, 45. "Buri Ram used to have nothing."

Siton Rianthaisong, 47, a farmer from Buri Ram's Phutthaisong district, said local villagers and headmen from outside the town were invited by Mr Newin to visit the CIC on Thursday. "I believe that it will bring many good things to Buri Ram," he said.

However, some villagers living outside Buri Ram's Muang district told the Bangkok Post Sunday that they could not afford the cost of entry to the circuit — 500 baht for one day and 750 baht for two days.

Mr Newin plans to organise several motorsport events at the circuit including the World Superbike Championship in March next year.

He has said that he wants the CIC to be the No 1 circuit in Asia.

The circuit is the 27th in the world capable of accommodating F1 — the fastest road course racing competition in the world.

It encompasses 12 bends on its 4.6km track, designed to support maximum speeds of 315kph.