CONCORD (UNITED STATES) - NASCAR drivers brawled in the pit lane Saturday after a number of feisty incidents on the track, throwing the sport into the headlines for all the wrong reasons once more. 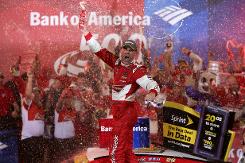 Kevin Harvick was celebrating his victory in the Sprint Cup in Concord, North Carolina, but all the attention was quickly diverted elsewhere as running battles erupted.

The post-race chaos was triggered when Brad Keselowski bumped both Denny Hamlin and Matt Kenseth on the cool-down lap, seemingly in retaliation for something that had gone on during the race.

Keselowski also ran into Tony Stewart by accident while aiming for Kenseth, prompting Stewart to reverse into the Penske Ford.

The disputes continued as enraged drivers emerged from their cars in the garage area.

Hamlin had to be restrained as he went for Keselowski, and moments later Kenseth got Keselowski in a headlock before the two were separated.

During the final two laps of the race, Keselowski and Hamlin had tangled while battling for position.

Kenseth said he was also hit by Keselowski during a caution period in the race.

"He's a champion, he's supposed to know better than that," a furious Kenseth said.

Hamlin accused Keselowski of being "out of control" on the track.

But Keselowski fired back: "Those guys can dish it out, but they can't take it. I gave it back to them and now they want to fight, so I don't know what's up with that."

After next Sunday's race, the number of championship contenders will be trimmed from 12 drivers to eight.

Only four drivers in the season finale on November 16 in Miami will be in contention for the season title.

In August, the governing body implemented new rules barring drivers from exiting their vehicles during races, except in case of fire or other danger.

That came after 20-year-old driver Kevin Ward was struck and killed by Stewart's car during a lower-level dirt track race.

Ward's car was disabled when he and Stewart collided in the race, and Ward was walking down the track apparently intent on confronting Stewart when he was hit in what authorities determined was an accident.

LONDON: Auctioneers Sotheby's said on Thursday that an "exceedingly rare" bottle of Cognac preserved since the end of the 19th century had set a new auction sales price record.