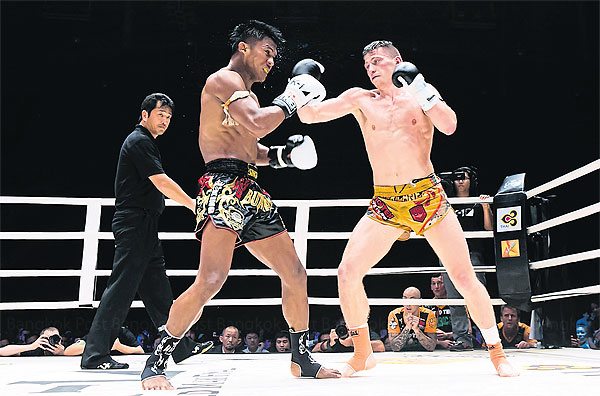 Buakaw Banchamek, left, in action against Enriko Kehl in Pattaya on Saturday.

Buakaw left the Pattaya venue immediately after the third and final round of his fight against Germany’s Enriko Kehl in the 70kg division of the K-1 World Max Final on Saturday.

But the bout ended in a draw and according to the rules an extra round was needed to determine the winner.

In the absence of the Thai, Kehl was declared winner.

On Tuesday, Buakaw told a press conference that he left the venue before the result was announced because he was unhappy with the way he was treated by the organisers.

The 31-year-old also claimed there were changes to the rules which put him at a disadvantage.

"We allowed the organisers to hold the event and we will look into the matter carefully," Sakol said.

“The issue has effected the country’s sports."

Sakol said that the organisers were only allowed to host a Muay Thai event and that he was surprised that Buakaw and Kehl fought in K-1 rules.

“Other combat sports such as K-1 and MMA [mixed martial arts] are rivals of Muay Thai," he said.

Meanwhile, Samart Payakaroon, a former Muay Thai and world boxing champion, said he believed that the incident occurred because Buakaw wanted to terminate his contract with K-1 which expires at the end of next year.

“Without the contract, he would be able to make money in other tournaments," said Samart.

But Buakaw said on his Facebook page that the move had nothing to do with his contract with K-1.

“Although I am under contract with K-1, I can fight in other tournaments," he said.

Buakaw is scheduled to fight in the TopKing World Series in France on Nov 15.

Buakaw said he left the venue to "protect Muay Thai" but Pinto had another idea.

“If you want to protect Muay Thai, you should respect the rules of any sports,’’ said the Frenchman.

“What you did was not for Muay Thai but for yourself."

However, he has been at the centre of several controversies over the years.

Two years ago, he disappeared from Por Pramuk boxing camp which had supported him since he was a child.

When he returned, he demanded that the camp free him from their contract. He claimed he was badly treated by the camp but he later said he wanted a bigger share of his fight fees.

He was also in conflict with Thai Fight organisers and he no longer fights in the tournament.

US denies hijacking masks in Bangkok

The United States had no knowledge of a shipment of face masks bound for Germany that officials in Berlin have accused it of diverting from an airport in Bangkok, a spokeswoman for the US embassy in Thailand said.

Bank of Thailand to hold Tuesday briefing on virus steps

BANGKOK: The Bank of Thailand (BoT) will hold a briefing on Tuesday on measures to mitigate the impact of the coronavirus outbreak.

Provincial authorities have stepped up preparations for quarantine to handle more people returning home through all modes of transport.